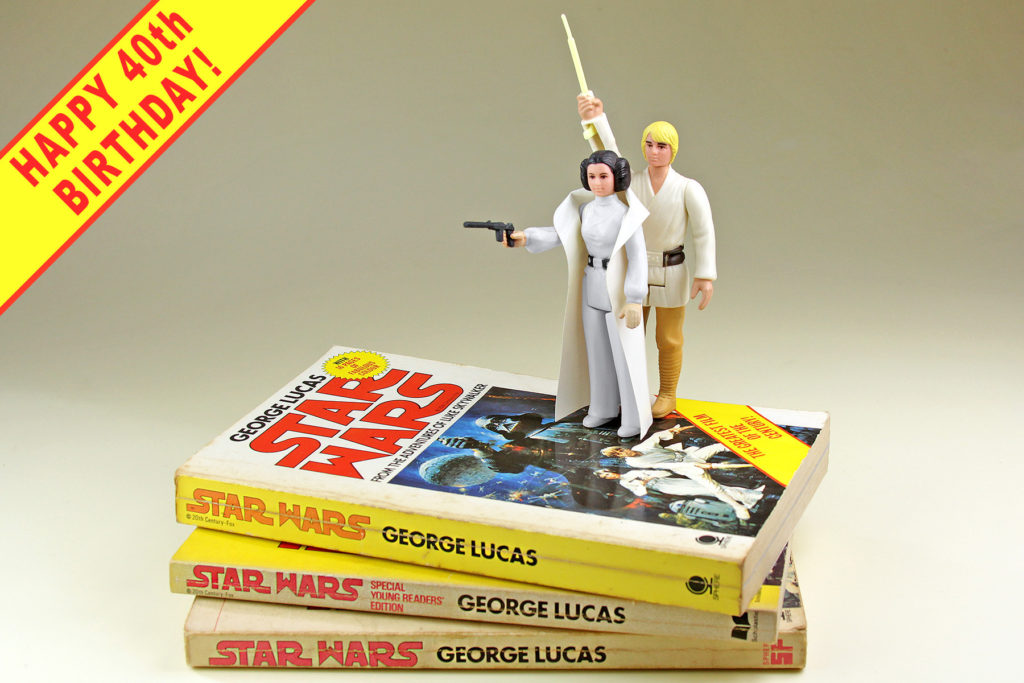 Happy birthday to Star Wars, which celebrates 40 years since its official release, on 25th May 1977, in the US (although it took a good few months further before premieres took place around New Zealand).

I distinctly recall coming home from my first big screen viewing of Star Wars in ’77. It had been a long trip to the nearest city cinema in Tauranga, and a late night for my 6 year old self, but I was buzzing with excitement as I strutted around doing my best C-3PO impersonation for the rest of the evening and the next few days. I received the novel and photo-filled storybook soon after, and from that point on, everything was Star Wars and Star Wars was everything. I hunted down the action figures from Kenner and comics from Marvel, consumed unhealthy amounts of bubble-gum and ice-blocks to get the associated stickers and trading cards, and listened to The Story of Star Wars on vinyl LP (recreating scenes in time with the narrative, with the aforementioned action figures) with such repetition that every detail was committed to memory.

We now live in a time of many Star Wars movies, but the pre-ESB era holds memories of a very different state of the Star Wars fandom. A state where the absence of context meant it was unclear how big Star Wars could actually get, or where it would ultimately end up taking us. It is interesting to look back now to see how the inaugural film was received by the wider audience at the time. The Listener magazine reviewed the film that started it all in its 10-16 December issue:

Everything they say about Star Wars being great fun, enormous entertainment, full of spectacle and old-fashioned thrills, is all true… The immediate impact is stunning, but later reflection (a mistake, it is not the sort of movie which should be reflected on) reveals how contrived everything is… Everything, even the much praised special effects in this film, is subservient to giving the audience a simple good time.

The battles between the rebel spaceships and the imperial fighters are actually nonsense, but they sure look nice. The ships don’t even look right – though used for close-range fighting, at visual distances they have tiny little windows and obscuring panels, and they manoeuvre like aircraft rather than spaceships.

And I’m sure nobody except hardcore science fiction fans will give a hoot. It is fantasy, not science fiction, and if one should feel disappointed by this then it is only because our expectations have been incorrectly primed. The two genres are not identical, though they do have regions of overlap – thus it is possible to treat science fantasy as sloppy science fiction and compare films of the two types….

Hard SF fans looking for more than escapism will have to wait until someone decides to release that interesting home movie Dark Star, or perhaps until Spielberg’s Close Encounters of the Third Kind. In the meantime, there is nothing wrong with luxuriating in the lavish visual effects and amusing incidents of Star Wars. 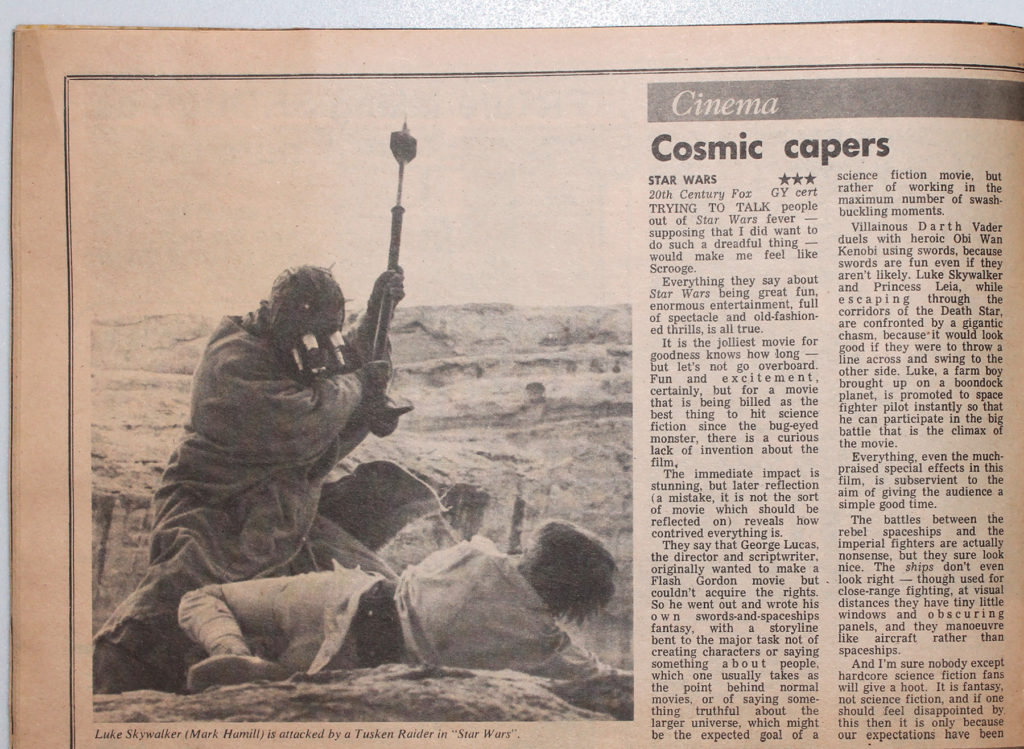 “Star Wars” is not an intellectual science fiction movie but a super fun movie that is a triumph of special effects to amuse and thrill.

Fans then and now will agree that it is a “super fun movie”, with little hesitation on that thought from most. For many of us, Star Wars has become so much more of a central theme in our lives and an analogy for the Force itself (“It surrounds us and penetrates us; it binds the galaxy together”), with a clear demarcation between the years before and the years after we each saw the film. Particularly with Disney revitalising the franchise and promising ongoing movies stretching forward to an unmeasured horizon, the Star Wars phenomenon has become very multi-generational, and has irrevocably claimed a position of pervasive significance in Twentieth and Twenty-First Century culture. 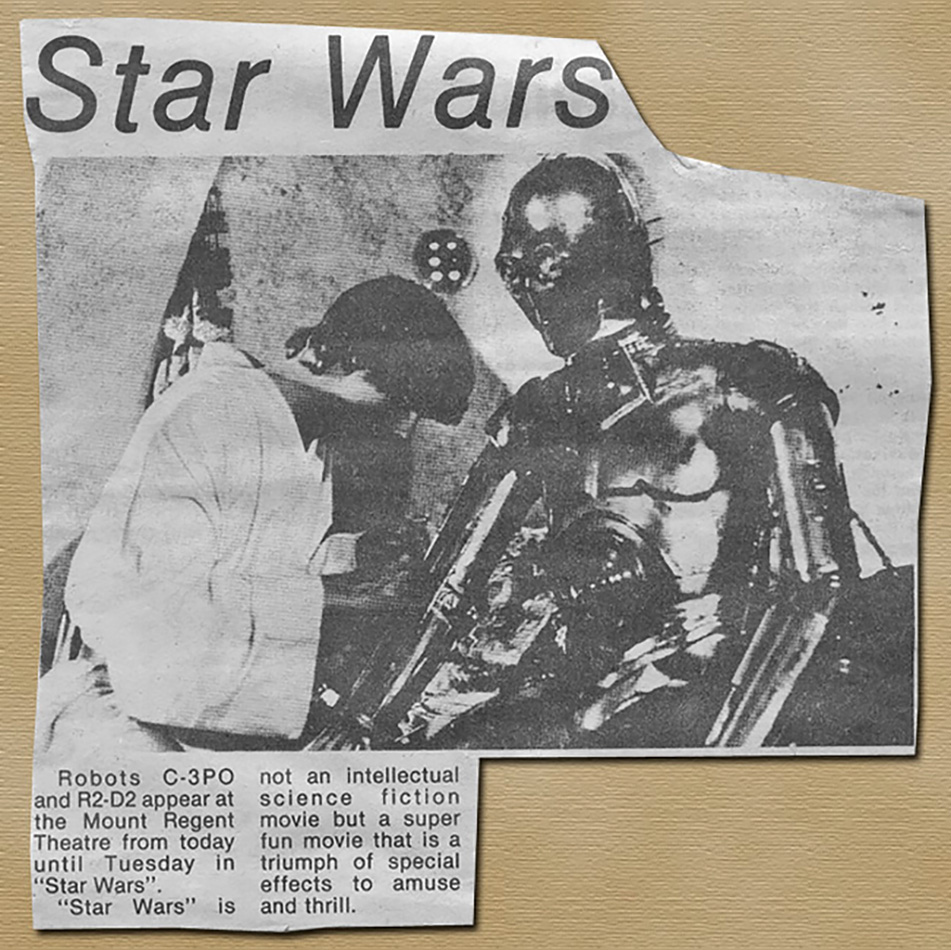