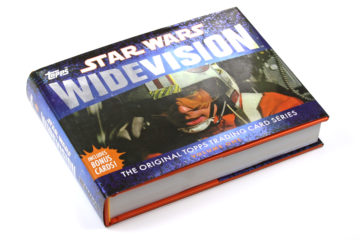 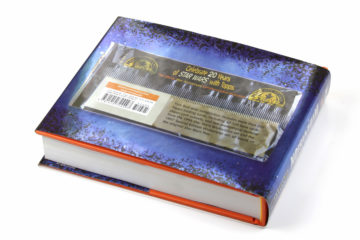 Topps Star Wars trading cards are amongst the most well known and most widely pursued Star Wars collectibles that have been made. They have stood the test of time, spanning from the release of Episode 4 in 1977, through to Sequel Trilogy and Star Wars Story movie tie-in sets, as well as digital incarnations in their Card Trader apps (Google Play), and the return of the beloved Star Wars Galaxy set scheduled for November of this year (Topps as a company, for that matter, has also unquestionably stood the test of time, celebrating its 80th anniversary this year). It is no surprise then, that literature on the topic of Topps Star Wars sets have been produced and are sought by fans keen to relive the nostalgia of the historic card releases. We previously took a look at the book associated with the 1983 Return of the Jedi trading cards (read the review here). Today we are flicking through Star Wars Widevision: The Original Topps Trading Card Series.

Like the publications covering the Star Wars, Empire Strikes Back, and Return of the Jedi card sets that came before it, Star Wars Widevision is a comprehensive compendium that includes imagery of each card in the 1995 Widevision series (base cards, the 10 card “Finest” chase cards, and associated promotional cards) as well as the 1997 Special Edition Widevision series. The book itself matches the physical dimensions of those volumes that preceded it (189mm x 147mm x 37mm, 432 pages), although it is bound in a landscape orientation to better accommodate the wide-screen aspect ratio of the cards depicted within its pages. Also like its predecessors, Star Wars Widevision features a dust cover that mimics the foil wrapper of the original collectibles. Included as a bonus element are 4 unique trading cards, attached to the inside rear cover, that recreate specimen cards, packaging, and the counter-top point-of-sale display box (the bonus cards, it should be noted though, are a standard size/format, not widevision format). 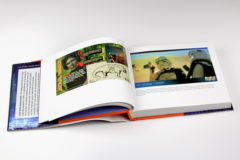 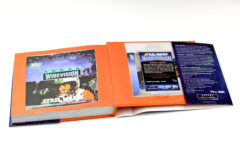 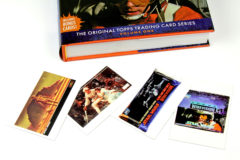 The pages that catalogue the trading cards proper are complemented by an introduction by Gary Gerani (original editor of the Star Wars Topps series), and contributions by Stephen Sansweet (president and founder of the Rancho Obi-Wan museum and previous Head of Fan Relations at Lucasfilm) that lead in to the Special Edition section, and that close the tale of Star Wars Widevision cards as an afterword. Gerani’s introduction recounts the development of the Widevision card series, which was the first photo-based Star Wars card collection since the vintage 1983 releases (Topps’ prior modern-era card set was the Star War Galaxy series, composed of artistic renditions of movie and expanded universe scenes, rather than being made of of cinema imagery). The Star Wars Widevision format was the first release from Topps to embrace widescreen proportions in a landscape orientation. It allowed the trading cards to accommodate the full breadth of the 2.35 ratio scenes, which, during the design process, had to be transferred directly from 35mm celluloid.

The Star Wars Widevision line paved the way for Widevision card sets from a few unrelated movies, but ultimately it came to be predominantly known for its association with the Star Wars Original Trilogy and subsequent films. It was a landmark gamble for Topps which paid off in that it achieved a legacy product that is very much worth revisiting and celebrating in book format. I personally have all of the original and early modern-era Topps card sets stored away in folders, but still thoroughly enjoy their trading card books too, as an adjunct and expansion to my archived collections.

Following the successful release of multi-series trading cards based on the original Star Wars film series (1977-83), Topps released the first volume of its Widevision series in 1995. These special cards were just as tall as the standard Topps trading cards but twice as long-a format that better reflected the widescreen dimensions of the films. Now, for the first time, every card, as well as rare promotional cards and limited edition chase cards, are reprinted in one deluxe collection. This new volume includes the fronts and backs of each card, showcasing original storyboards, fun facts, filmmaker quotes, behind-the-scenes photos, and exclusive commentary by George Lucas. Also included are four bonus cards, rare promotional images, an introduction by Gary Gerani, the original editor of the Star Wars Topps series, and an afterword by Star Wars collector Stephen J. Sansweet. 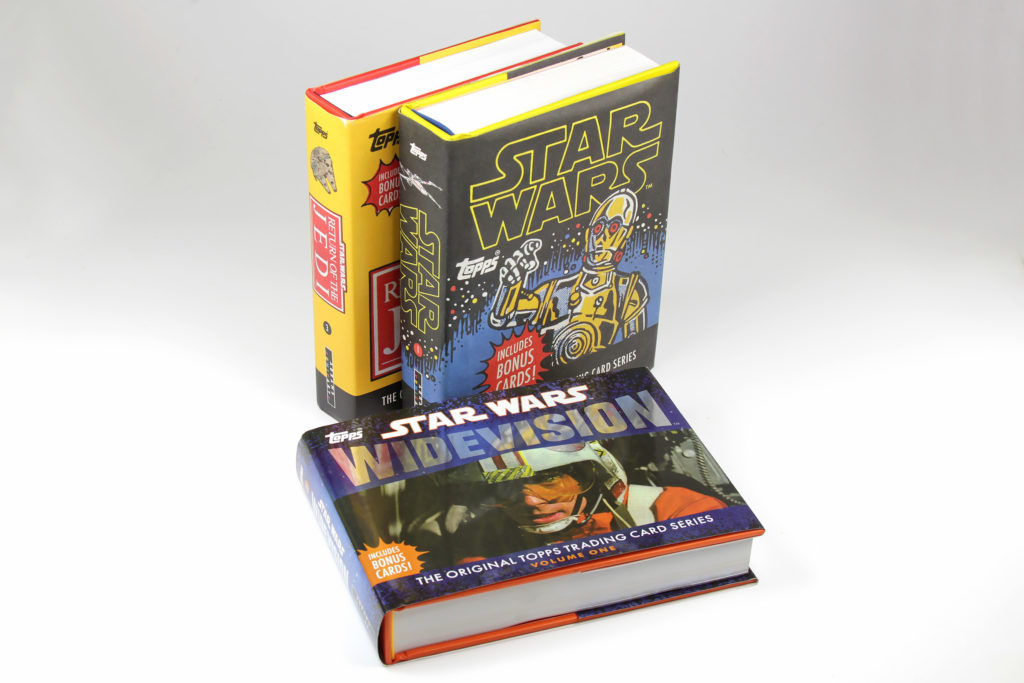