Today we’re revisiting some classic SWNZ content, with the third in a series of Gerald Home interview articles, originally published in August 2004. 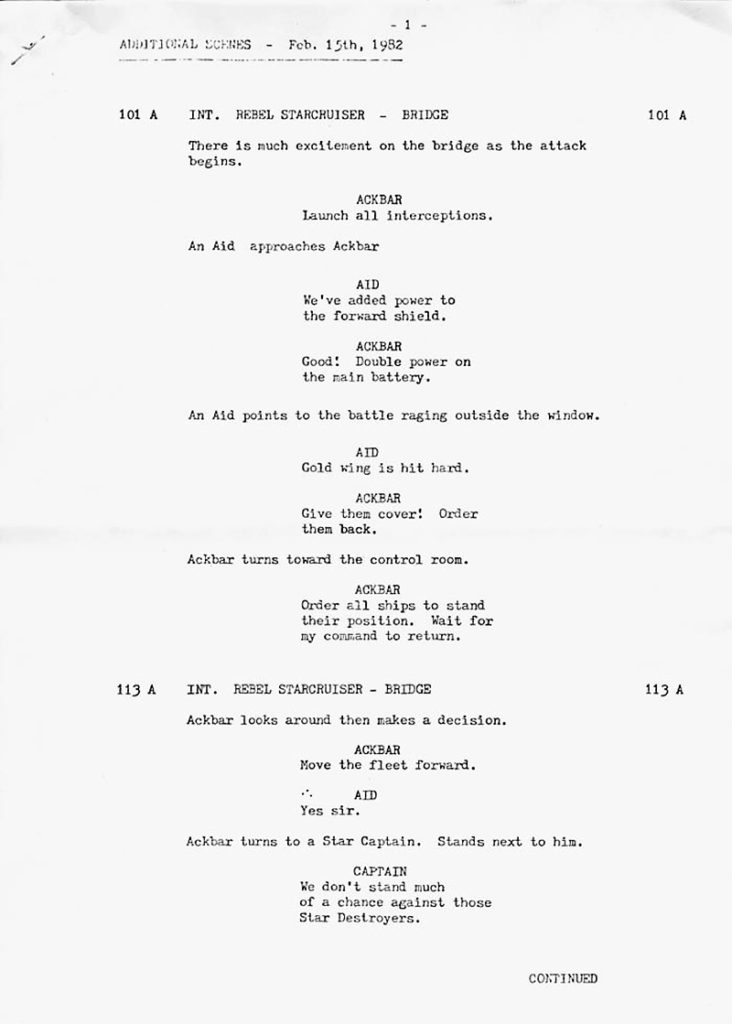 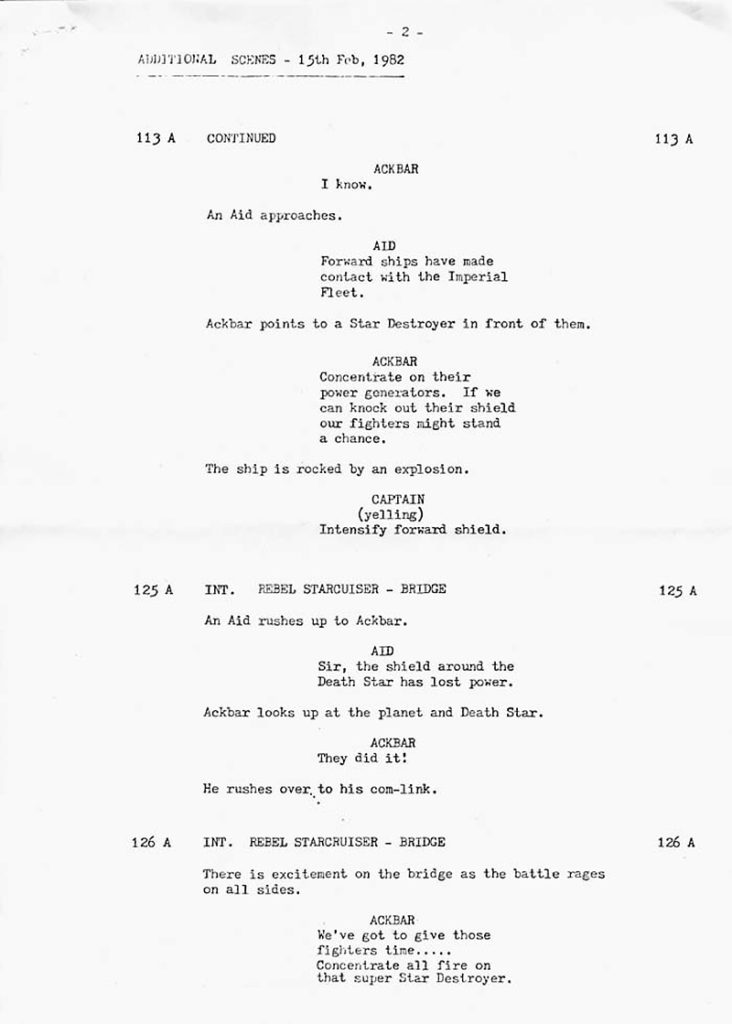 ‘Home One’, the largest Mon Cal warship and Rebel flagship in the Battle of Endor, played a pivotal role in the final skirmish against the Imperial fleet. It comprised a significant part of their contribution to the Rebel cause, and, because the starships control interfaces and mechanisms catered to the unique ergonomics of the Mon Calamari species (including visual displays operating in part of the electromagnetic spectrum outside the human range of perception) included the crew as well as the hardware.

This fictional context meant that Mon Cal characters and extras held quite a lot of screen time in the latter half of ‘Return of the Jedi’. UK-based actor Gerald Home (note the connection between Gerald’s surname and the designation of Rebel flagship) was the talent behind the Mon Calamari Officer and aide to Admiral Ackbar. (He was also responsible for Tessek, aka Squid Head, as detailed in the earlier articles, Tales of the lost Calamari, and ‘Revenge of the Jedi’ call sheets). In the final cut of ‘Jedi’, Ackbar was the only rebel alien with a significant speaking role, but footage was filmed that almost led to an alternative version of the campaign at Endor, wherein Gerald’s Mon Calamari character engaged Ackbar in dialogue. The exclusion of this variant of the script has resulted in one of the most obscure Lost Scenes of the Star Wars Original Trilogy. Until now, that is.

The deleted scenes have the anonymous Mon Cal officer (listed in the scripts as “aid”, as distinct from the call sheets wherein his role is described as “officer/controller/aide” or “officer/controller”) providing tactical commentary to Ackbar, in between his attendance to unspecified generic control panels of lights and switches. Interestingly, although the detail of these scenes didn’t make it through to the released version of ‘Jedi’, a lot of the essence remains. Gerald’s announcement, in scene 125A, that “the shield around the Death Star has lost power” is, of course, a crucial plot element. That line is later substituted by a similar one from Ackbar: “The shield is down! Commence attack on the Death Star’s main reactor”.

How does it come about that production details such as this fade into near-extinction? Gerald explains: “Firstly, when a scene in any film or TV programme is cut or not used, it is generally not mentioned again. Most actors will have experienced this – I have had several TV parts cut to ribbons! – but that’s part of the job and you just get on with life and don’t mention such roles again.

This is how I was with the Mon Calamari Officer…for 21 years I never mentioned that I had played him as well as Squid Head! But I didn’t know that this wasn’t common knowledge until my very first convention appearance in April 2003. A fan there asked me if I had kept any souvenirs of my time on ROTJ and I replied only my script and call sheets…Well, there was total silence before I was asked to explain what I meant.

I was hired as a ‘mime artist’ principally to play Tessek/Squid Head, but also to play a Mon Calamari.

During the many waits on set to re-do lights and so on, I naturally got talking to many people – one of whom was Stuart Ziff, who is listed in the credits as Chief Articulation Engineer. Stuart was part of the Phil Tippett team and he helped take care of us and various creatures and puppets. But as part of the production team he also attended various production meetings.

I got to know Stuart quite well and he learned that I am primarily an actor – in fact I had finished a long run in a play in the West End of London shortly before starting on RETURN OF THE JEDI.

One day Stuart was at a production meeting where it was announced that – as an experiment – some extra scenes were going to be shot with another speaking Mon Calamari, along with Admiral Ackbar. And, because he knew that I am an actor, Stuart suggested me for this role!

And so it was that I found myself going home one night with 2 pages of script to learn”.

Gerald’s Mon Cal mask wasn’t articulated in any way. Unlike the mechanised Ackbar prosthetics, approximate lip-synching was achieved manually, by painfully exaggerated jaw movements and associated body language. Gerald describes the effect: “I was a little surprised – I’m sure it wasn’t as effective as it would have been with an articulated mouth, but it was ‘an experiment’ after all”. Some consolation for his effort could be derived from the fact that visibility wasn’t as bad as it was in the Squid Head costume: Gerald found that a Mon Calamari’s eyes are about level with those of a human, although they are characteristically oriented in a manner that precludes binocular vision. Still, without the skills and “man-power” that the fish-eyed and flippered Calamari-people bought to the Rebel fighting team, the Battle of Endor may have had quite a different outcome. Follow the excitement on the bridge as the battle rages on all sides…

There is much excitement on the bridge as the attack begins.

An Aid points to the battle raging outside the window.

ACKBAR
Give them cover! Order
them back.

Ackbar turns towards the control room.

ACKBAR
Order all ships to stand
their position. Wait for my
command to return.

Ackbar looks around then makes a decision.

Ackbar turns to a Star Captain. Stands next to him.

CAPTAIN
We don’t stand much
of a chance against those
Star Destroyers.

AID
Forward ships have made
contact with the Imperial
fleet.

Ackbar points to a Star Destroyer in front of them.

ACKBAR
Concentrate on their
power generators. If we
can knock out their shield
our fighters might stand
a chance.

The ship is rocked by an explosion.

An aid rushes up to Ackbar.

AID
Sir, the shield around the
Death Star has lost power.

Ackbar looks up at the planet and Death Star.

ACKBAR
They did it!

He rushes over to his com-link.

There is excitement on the bridge as the battle rages
on all sides.

ACKBAR
We’ve got to give those
fighters time…..
Concentrate all fire on
that super Star Destroyer.