Today we’re revisiting some classic SWNZ content, with the start of a series of Gerald Home interview articles, originally published in May 2004.

Part One :: Tales of the lost Calamari

Far into the Galactic periphery, off the Rimma Trade Route and beyond the Tion Cluster, lies the watery world of Mon Calamari. This Outer Rim planet is home to two of the more distinctive aliens to have been introduced to our earthly theatres in ‘Return of the Jedi’: the Quarren and the Mon Calamari.

Tessek the Quarren (aka “Squid Head”) mingled with Jabba’s minions in the early scenes of ROTJ. The Expanded Universe literature tells us how his plot to overthrow Jabba’s criminal empire was motivated by a drive to use his business acumen for more legitimate capitalist purposes. His intricate scheming is interrupted when some captured Rebels are sentenced to Death by Sarlacc. Although we might presume that Tessek perished at the time of Jabba’s fiery demise, we learn that his final fate actually involves the bizarre transfer of his central nervous system to the nutrient tanks and spider-droids of the B’omarr Monks.

In the latter scenes of ROTJ, a number of Mon Cal characters crewed the great spaceships their people contributed to the rebel cause. Ackbar in particular is renowned for his role in leading the offensive manoeuvres against the second Death Star. The Admiral was well supported by a coterie of Calamari characters, including an executive officer and dedicated aide who provided crucial ministration during the hectic battle.

Despite their common homeworld, the Quarren and the Mon Cal never cross paths in ‘Jedi’…at least not on screen. Gerald Home is the actor beneath the squid-like masks of both Tessek and the Mon Calamari Officer/Aide. 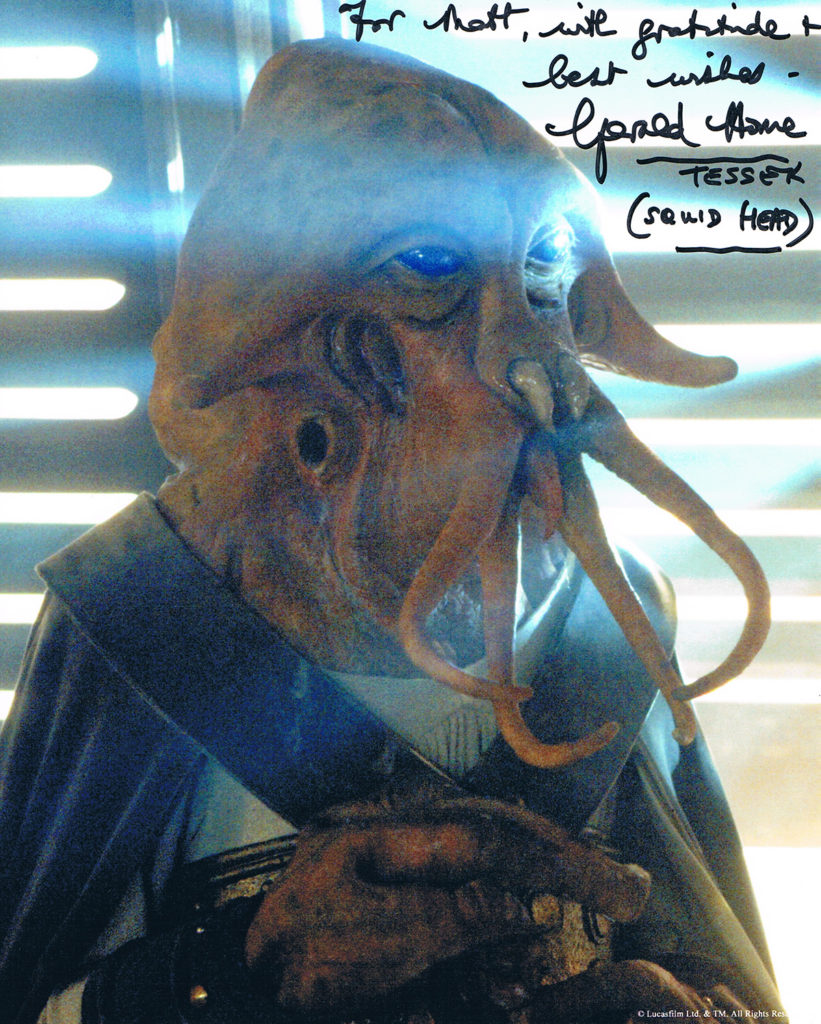 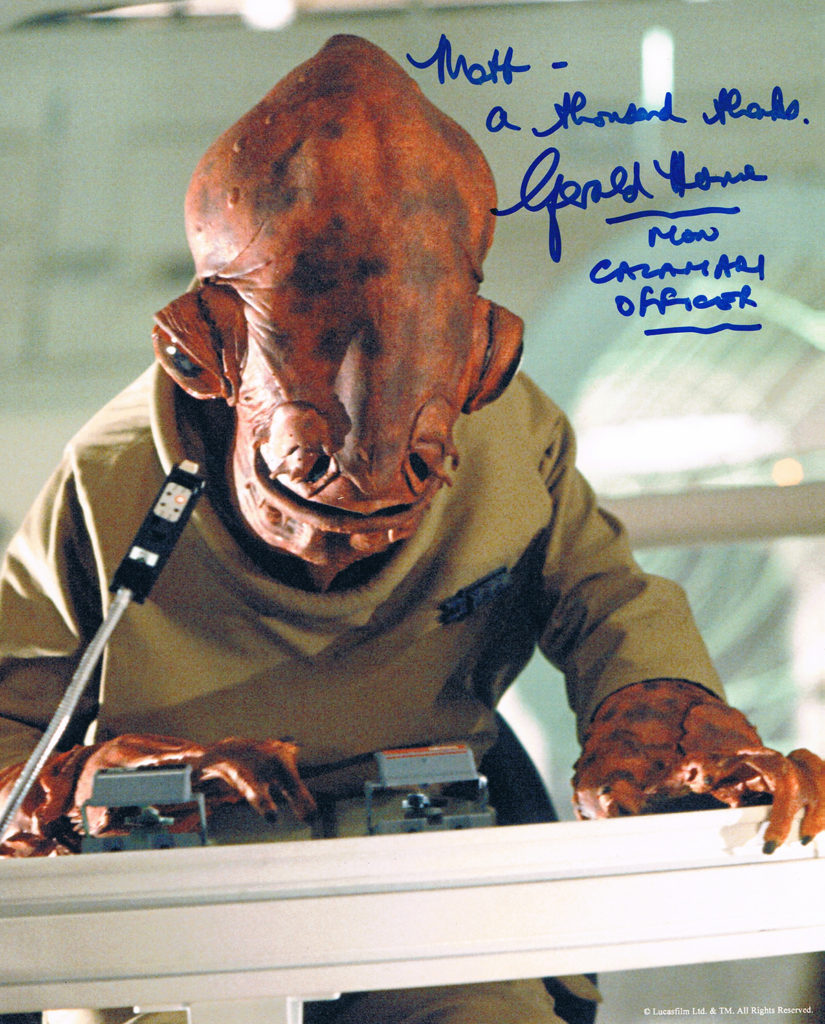 In fact saying “beneath the mask” arguably undersells the elaborate effects and garments involved. Although Gerald’s silent characters (more on that later!) didn’t require facial articulation for the sake of lip-synching, they were still fairly involved appliances that requires assistance to don, and during shooting. Gerald recently took time to recount to me some of his ‘Return of the Jedi’ experiences and talk of the work he did prior, and has done since. This article will delve into those tales, and a couple of subsequent articles will continue his story by also referencing, first, a couple of call sheets relating to his scenes as a Mon Calamari Officer, and second, some pages of ‘Revenge of the Jedi’ script that reveal some alternative dialogue and activity that didn’t make it to the final print, and hence have remained largely unexposed to this point.

To continue…the Squid Head mask covered Gerald’s shoulders (in the picture above it can be seen that quite a bit of Tessek’s neck is exposed), and was actually strapped in place under his arms. Latex gloves completed his ‘other-wordly’ look, and detailed robes and cloak highlight the characters role as an accountant, as distinct from Jabba’s armoured heavies (although this back-story was likely retro-fitted sometime after the character was conceived). Visibility was low. Holes beneath the “nose”, afforded a limited view of the floor immediately in front only. Gerald describes the consequences: “When you’re in a mask, you think of things as a blind person might: how many steps to the right? What obstacles are in the way? etc. I had one terrifying bit…running from screen right to screen left, with a few other creatures around me and directions being shouted out to me. The trouble was, I knew the Rancor pit was open, and that I was very close to it – I obviously didn’t want to fall in, but couldn’t see it. Any confusion apparent in that scene was very, very real!”

Visibility was a problem overcome by rehearsal and situational awareness. Ventilation (lack thereof) was a second problem introduced by the heavy latex, that simply had to be endured. Gerald: “was it hot and uncomfortable in the masks? You bet! The abiding memory of many of the Jabba scenes was the heat and the smoke…and once inside the mask, sounds became muffled. If inside for any length of time, it would be very easy to fall asleep. Seriously! Lack of oxygen, and heat from all of those bodies and lights…the atmosphere was very soporific. Also, to avoid panic or claustrophobia, once inside the mask, one always had to keep calm, and concentrate on breathing and conserving oxygen”.

“But we were fantastically well-taken-care-of by Phil Tippett and his team. Each of us had a dresser/minder who whisked the masks off whenever possible. Also, they had hair dryers which they used to give us air if there was a break in the filming but no time to take off the masks. Phil and his team treated us, and the costume/characters, brilliantly, and I am delighted for him – and them – that their creations are still popular all these years later”.

Many of the creatures from Jabba’s court were played by people experienced as mimes. The “physical acting” skills were specified as being required, by director Richard Marquand. In the absence of verbalisation, these characters were bought to life by performers who were very aware of body movement, and who knew how to use their bodies to portray something more than static background personae. Up to 150 people were required for such activity for some of those scenes in Jabba’s Palace. It was through contacts Gerald had made during previous mime work, that he became involved in ‘Jedi’.

Mildly ironic is the fact that prior to working in mime (after graduating from drama school in London), Gerald went to Monash University (Australia), where he achieved qualifications to teach French, German, Spanish, and English as a second language. He thereafter worked as a teacher, for three years, in Victoria. The metamorphosis to mime continued the themes relating to communication, but via a very different modality. The theatre company Gerald first worked with, after drama school, performed a show called ‘Prufrock’ (inspired by a T.S. Eliot poem) at festivals in England and France. It was through this experience that he became acquainted with, or aware of, a number of other performers who would later be involved in ROTJ, including a mime teacher/director called Desmond Jones. Desmond became the mime artist co-ordinator for ‘Revenge of the Jedi’… 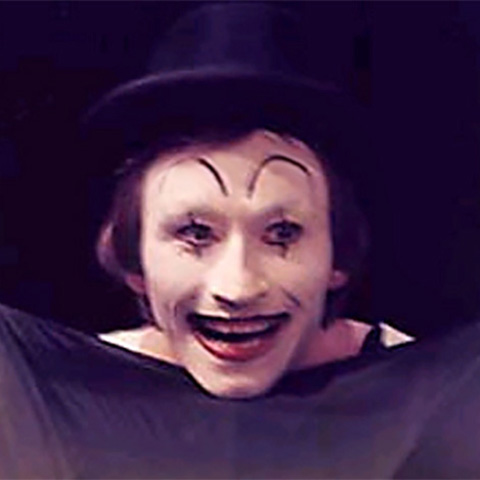 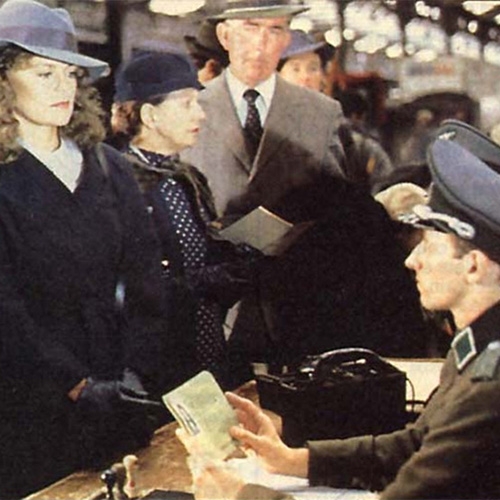 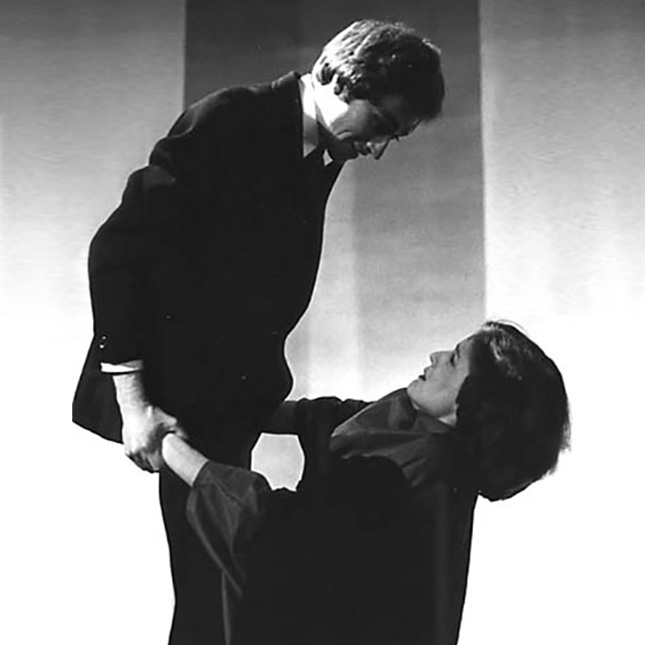 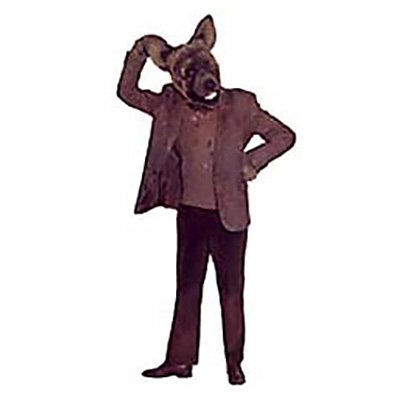 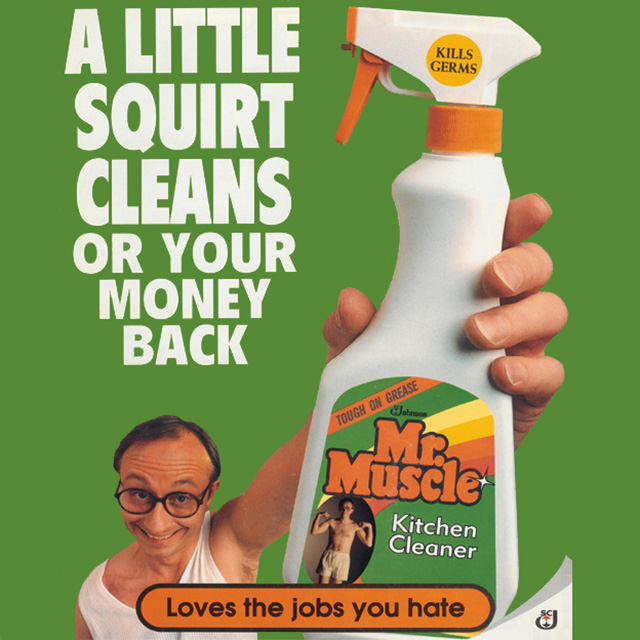 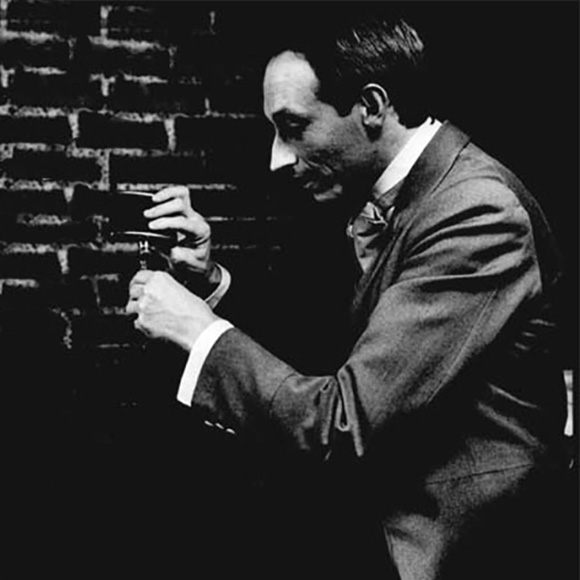 Following on from that, Gerald worked with a leading UK theatre-for-children tour – ‘Polka’. 4 actors presented plays with dozens of characters, combining masks and puppetry with straight character work. That provided, as well as other experience, a training ground that preceded Gerald’s involvement as a puppeteer in Warner Brothers’ big-screen version of ‘Little Shop of Horrors’. Using those skills, he also worked in a few ‘Spitting Image’ television specials.

Gerald’s full resume of theatre work is too extensive to list here in its entirity. Included was a long run (13 months) in ‘No Sex Please, We’re British’, as Superintendent Paul, at the Strand Theatre in the West End of London; a villainous involvement as Moriarty in ‘Sherlock Holmes and the Adventure of the Sumatran Devil’ (an early work by ‘His Dark Materials’ author Philip Pullman); and an array of others ranging in scope from ‘Aladdin’ and ‘The Wizard of Oz’, through ‘Wind in the Willows’ and ‘A Midsummer Night’s Dream’, to ‘A Dream Play’ and ‘Dreams of Anne Frank’.

His first role on the television screen was as a passport officer in ‘Jenny’s War’ (a test of commitment – filmed on a freezing day, outdoors at Marylebone Station, London). Subsequent work included roles in such BBC productions as ‘Scarlet and Black’, ‘The Boot Street Band’ (2 series as Mr Prince), ‘A Stolen Life’, ‘Keeping Mum’, and, recently, ‘Casualty’ (as Mr Lock). With other studios, also listed are ‘Harry’s Mad’, ‘Pay and Display’, and ‘Time Gentlemen Please’.

And, believe it or not, you’re probably already more familiar with Gerald Home ‘unmasked’ than you might think. As Mr Muscle, Gerald put modesty aside, donning unflattering garments and getting on the wrong end of exaggerated perspective to personify the antithesis of the kitchen cleaner brand. The series of television and print advertising utilising that imagery was used in Europe, Australia and New Zealand for a number of years.

The Mr Muscle role was one that Gerald lists amongst his favourites – because of the opportunity to convey his personality through the character, despite the abbreviated screen time, and because of the positive reactions the character seemed to evoke amongst viewers. At a higher level, Gerald describes his preferred roles as being those at the extremes of the entertainment spectrum – deep and intense, or comedic. With respect to theatre, he conveys a passion for productions in which the actors play several roles: “…four of us did a tour of Dickens’ ‘A Christmas Carol’. One minute I was Bob Cratchit; a quick dash off-stage to put a hat and mask on, then back on to play Marley’s ghost; off again, new hat or half-mask, and on again as the ghost of Christmas Present, etc. It is totally rewarding for an actor to do something like this, and I loved it! A similar thing was ‘The Blue Angel’ for the Royal Shakespeare Company in the West End of London – multiple roles, and singing as well”. 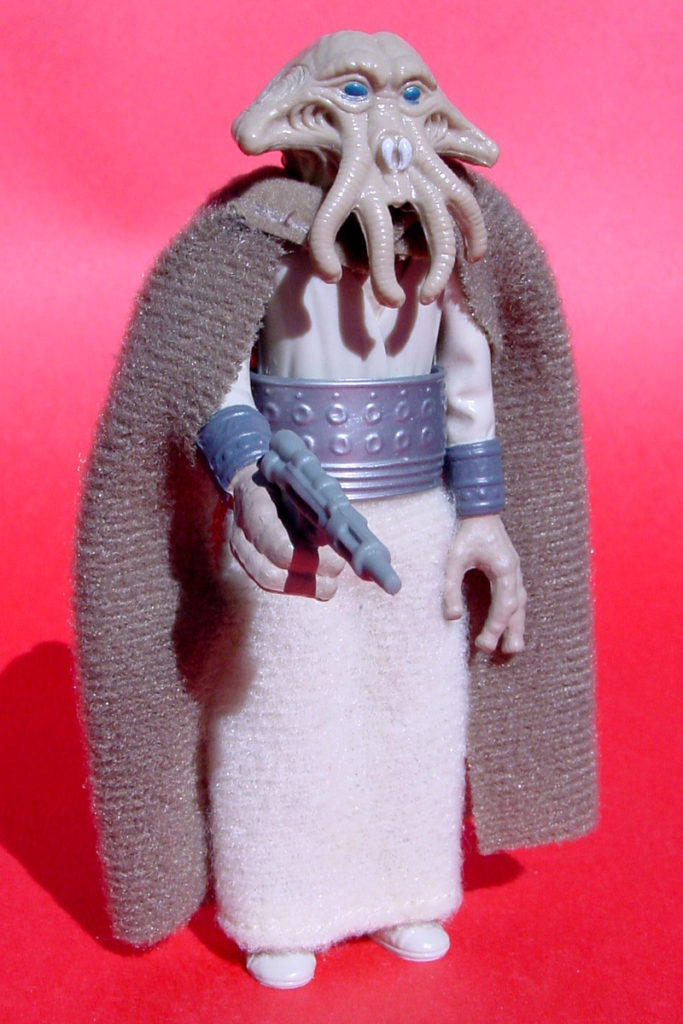 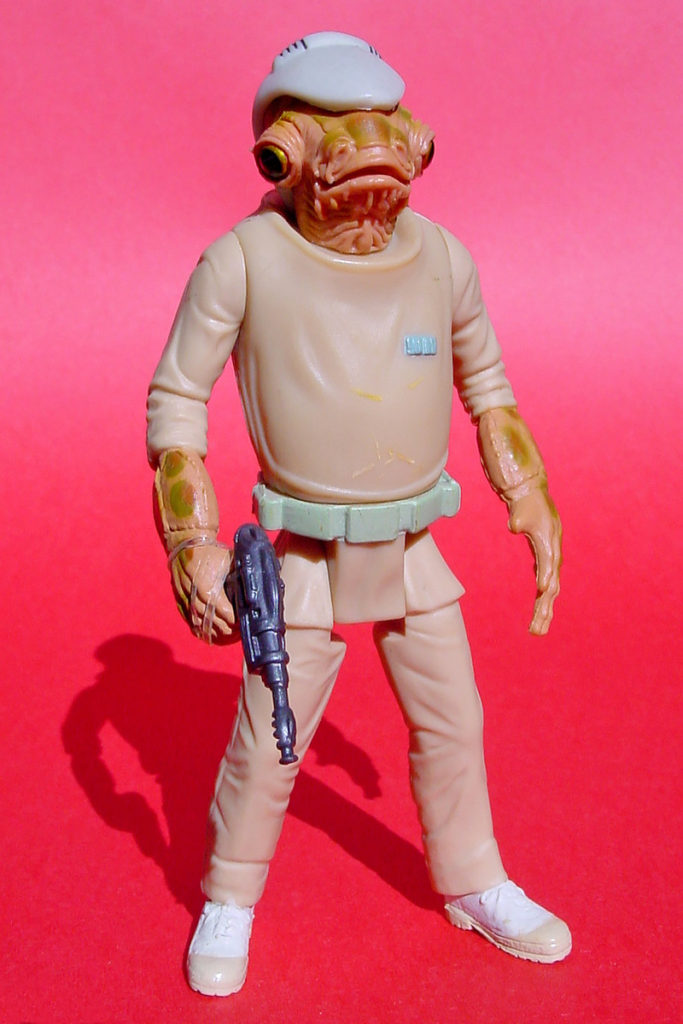 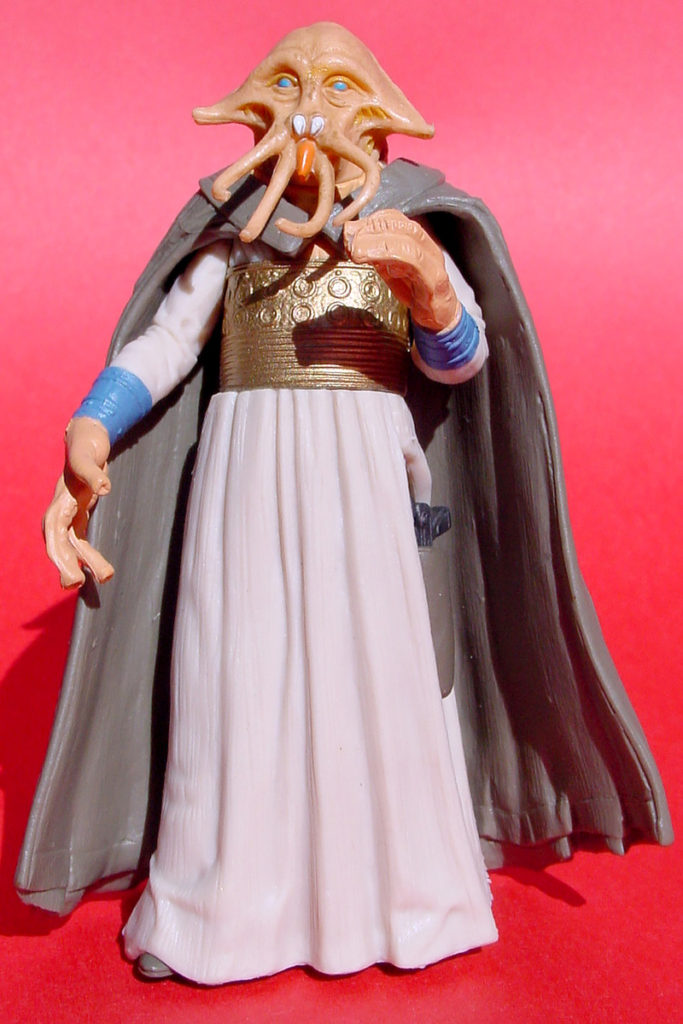 Gerald Home: screen actor, theatre actor, mime artist and puppeteer. But, you know someone’s really made it in the popular culture arena when included in such a list is…’action figure‘. (Comes with life-like tentacles, and concealed blaster pistol. Choking hazard – not for children under 3 years).

Previous: Rogue One Lunchboxes at Whitcoulls
Next: Rogue One/Rebels 2-Packs at The Warehouse