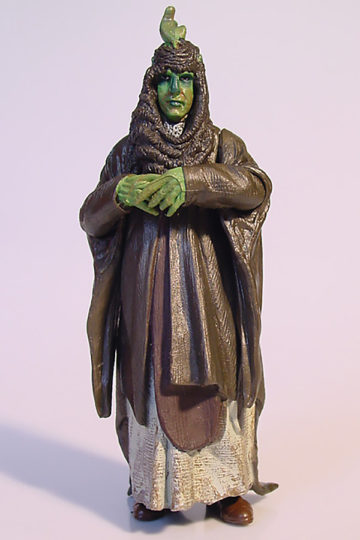 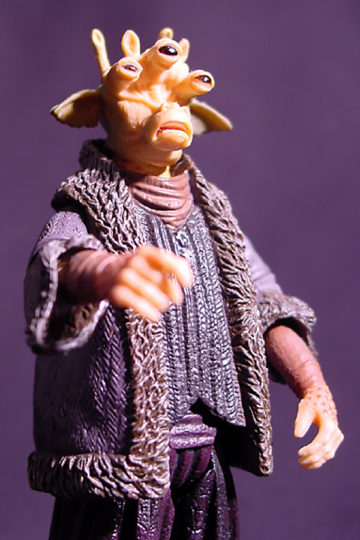 Steve Boyle is a creature technician and special makeup effects artist currently residing in New Zealand and working for Weta Workshop in Wellington. In Star Wars: Attack of the Clones, Steve worked behind the scenes making monsters and aliens; but he also stepped in front of the camera on a couple of occasions, to don make-up and appliances himself, in order to portray Koorivar politician and separatist Passel Argente, and three-eyed Gran senator Ask Aak. As such, he qualifies as a current Kiwi, and has earned a place in the NZ Celebrities files. SWNZ recently had the opportunity to put a few questions to Steve about his Star Wars, and other movie-making, experiences.

SWNZ: Let’s jump in at the Star Wars end of the story. You’re the man beneath the prosthetics and make-up of Episode II’s Ask Aak and Passel Argente characters. Can you tell us how you came to portray those roles?

Steve: By accident actually; I was working on the Ask Aak suit at the time and the original performer pulled out at the last minute. We felt that maybe one of the FX guys should wear it – someone who was familiar with the limitations and the restrictions due to its weight and the animatronics. So I ended up getting in it to see if it fitted, and it did.

As for Passel Argente, my boss at the time mentioned that “there was another character – would I be interested in wearing prosthetic for it.” I jumped at that too. I was told it would be a background guy, a senator called Passel Argente. My face was cast and we sculpted the prosthetic pieces. The following day the script came out and when reading it it turned out my character had dialogue with a character called Count Dooku. At the time it was assumed that Dooku was going to be a digital character…but, about a week later, I found out that I would be performing with Christopher Lee and Jango Fett!!! I’ve been a Star Wars fan since I was a kid and a HUGE Christopher Lee fan my whole life so you can only imagine how I felt… until the film came out and that scene, and me, were cut! LOL. Oh well, I still have the memories and it was amazing.

SWNZ: Have you learned much about the backstories of either of these characters, either before or after your involvement in the filming?

Steve: Only a little: Passel is a really interesting character…a real back-stabbing, dirty politician, and we often felt that it would have been great if he had a much bigger part. As for Ask Aak, I never really knew a lot about his background, though on the slow days as we waited to be shot we used to laugh and make jokes thinking of how the Ree Yees/Ask Aak species would reproduce. 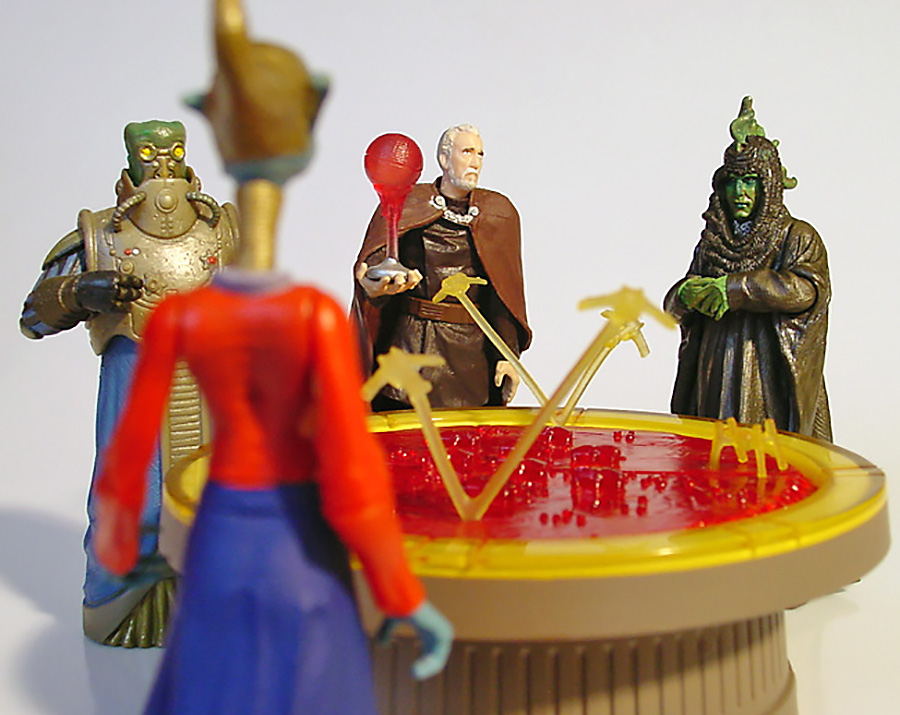 SWNZ: How much time did you spend in make-up and filming the scenes involving those characters in total? What similar experiences had you had prior to taking on these roles? Who was on the team you worked with when you were being filmed (did you have much/any interaction with George Lucas)?

Steve: From memory, it was about 2 days of filming for both characters. I hadn’t really done much performing in suits before that – I much prefer to be on the other side of the camera. When I was was wearing the animatronic head for Ask Aak, the two techs were Martin Crowther and Matt Sloan…they operated my facial expressions and were doing things between takes like making my character yawn. LOL!

I had quite a bit of interaction with George Lucas – I was told that I would probably be directed by an assistant directer, but that wasn’t the case…George was always there directing me.

SWNZ: Can we explore your views on, and feelings about, Star Wars? What did the Star Wars epic mean to you, both before and after your direct involvement? Are you a fan at all of any of the Star Wars merchandise lines – collectibles, games, books or comics etc?

Steve: I don’t actually collect any of the merchandise – I had the figurines when I was a kid but [these days] I move around so much that everything I own ends up in storage – so I try to keep the collecting thing to a minimum. Star Wars has always been important to me though…the original cantina sequence was one of those moments that helped inspire me to make monsters for a living.

Steve: I was hired as a makeup effects artist on Star Wars, having done work with the company involved (JMB fx) for a couple of years before that.

King Kong was the film that brought me to Weta – I met Richard Taylor in Australia and he offered me work back in New Zealand. There was a small team of us looking after the prosthetics for the natives [of Skull Island]. We sculpted the various prosthetics for them and applied them on the day, body painted them and maintained them on set. After that was all completed I was going to go home, but Richard offered me work in the miniatures department so I took that as well. I had never done miniature construction before that, but I loved it. I learned so much and it was satisfying when you saw the finished shots in the film.

SWNZ: How did you get into your career of creatures and effects? How long have you been doing that sort of work? Is there any specific project you’ve been involved in that you found to be particularly interesting/would consider your favourite?

Steve: I’ve been making creatures my whole life…I never had a view to do anything else. I started when I was 10 years old, and it was an obsessive hobby until I started working in the industry at about 21. As for a favorite, I would have to say the project I did last year – Daybreakers. It’s a modern day vampire film shot in Australia, and starring Ethan Hawke and Willem Dafoe. It was directed by the Spierig Brothers whom I went to film college with over a decade ago. It has more prosthetic work in it than anything I have ever done before and I had an incredible team working for me.

SWNZ: Now, just for clarity, you’re currently living in New Zealand, working at Weta Workshop? Presumably you resided in Sydney during the filming of ‘Attack of the Clones’. Where did you grow up…what country/city do you think of as ‘home’?

Steve: I’m currently living in New Zealand but I grew up in Brisbane, Australia. I still call Brisbane home because all my close friends and family are there… I’m not sure if I’ll ever live there again but it always feels good to return. We are planning on moving to Melbourne (Australia) soon though.

SWNZ: And, finally. do you have any interesting anecdotes or fond memories from your work on either side of the camera on ‘Attack of the Clones’ that you’d like to share?

Steve Two come to mind. The first was meeting George Lucas the first time. I was in the Ask Aak suit and you can’t see anything because of the way the creature head is made, you can only see part of the ground you’re walking on and you cant see what’s in front of you. So, I’m being lead by an assistant director wearing a fat suit, a cow head, six fingered gloves and giant alien feet that resemble flippers and I’m finally introduced to George Lucas! I had been waiting for that moment for so long, but I couldn’t hear anything he said because of the mask and all I could see was one of his sneakers!

The second is a memory I’ll take to my grave – when I was in prosthetic makeup for Passel, I was waiting in the green room waiting to be called on set. Christopher Lee was in the room with me talking about having sword fights with Errol Flynn and his history with Vincent Price and Peter Cushing! His mind really is a soaked sponge that oozes life-experiences and stories worth telling! It’s impossible to not be in awe of him. 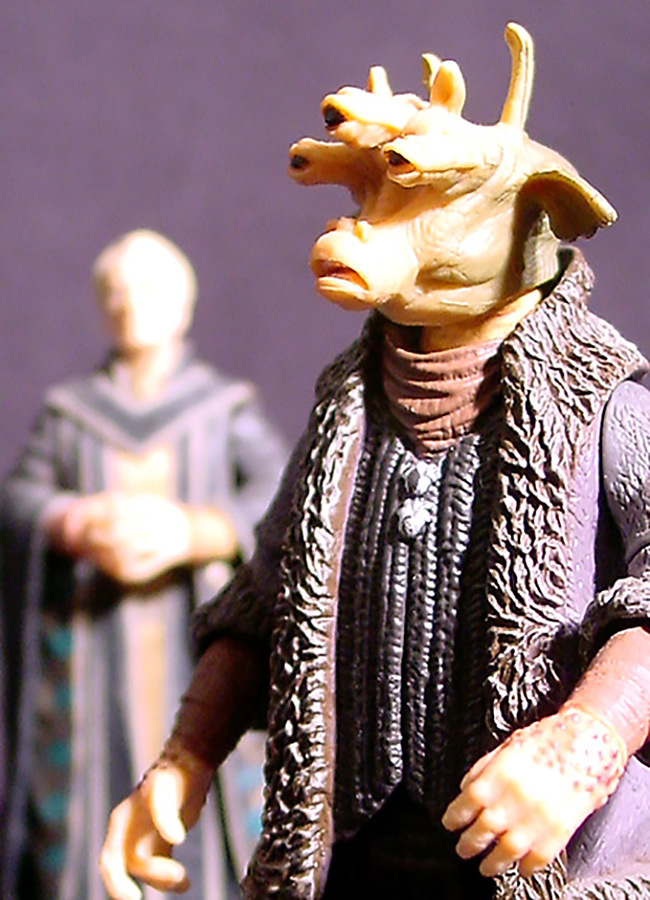 Previous: Clone Wars Happy Meals at McDonalds
Next: Around the Web – GalacticBinder.com