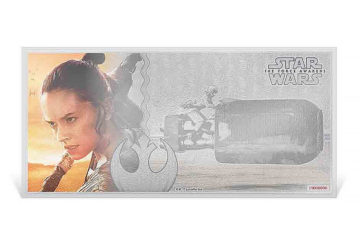 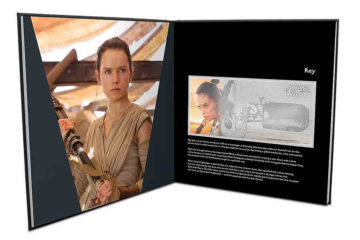 The latest silver coin note from New Zealand Mint, featuring Rey, is the first in their The Force Awakens series. And because it kicks off a new series of silver coin notes, all from episode 7 (scheduled to be released later are: Finn, General Leia Organa & Han Solo, Kylo Ren, Poe Dameron, BB-8, and a Stormtrooper), it includes a collector’s album.

This first striking 5g pure silver coin note in the Star Wars: The Force Awakens Collection features a close up coloured image of Rey and a detailed engraving of the scene featuring Rey with her speedster, the movie’s logo and the Rebel Alliance starbird. The unique number in the mintage is also printed on to the note.

A Star Wars Collector’s Album is included with purchase. Inside a protective cover, this hardcover album includes a page for each of the seven-coin notes in the collection, which will include Rey, Finn, Leia Organa & Han Solo, Kylo Ren, Poe Dameron, BB-8, and a Stormtrooper. The album is Star Wars themed, with each page designed to complement the corresponding note – including a brief summary of the character’s role in the film.

The obverse features the Ian Rank-Broadley effigy of Her Majesty Queen Elizabeth II and is legal tender in Niue.