After months of anticipation, September 1st 2017 – dubbed ‘Force Friday II’ – saw the official release of the first wave of merchandise for Star Wars Episode VIII: The Last Jedi. There were no ‘midnight madness’ events in my area, so my fiancée and I were up bright and early for the opening of our local Warehouse store the following morning. Unfortunately, things were a little underwhelming at first. There was minimal promotional signage, and – by some error – no 3 3/4″ or 6″ figures on the shelves. Staff soon remedied this, however, and were kind enough to give me first choice of the unopened case assortments.

Next up was Farmers, where things were slightly better organised. Stock was still being shelved at the time of opening, but the store had a healthy supply of the full 3 3/4″, 6″, and 12″ range of figures and vehicles. Best of all,  they had their 3 3/4″ figures reduced down to $11.99 each, as well as a 20% reduction on all other stock. 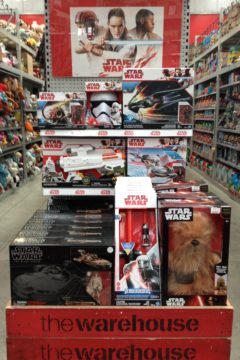 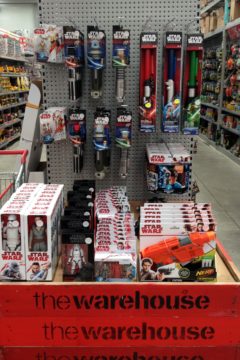 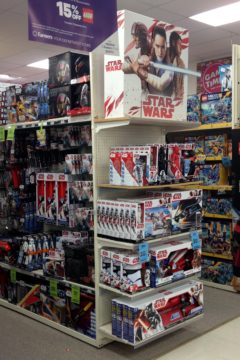 The final visit on our tour was Toyworld, which had the most limited (and most expensive) range on the day. While they were offering a 20% discount on all Star Wars toys, this couldn’t bring their high prices (such as $19.99 for a 3 3/4″ figure) down to a level that could compete with the likes of Farmers. 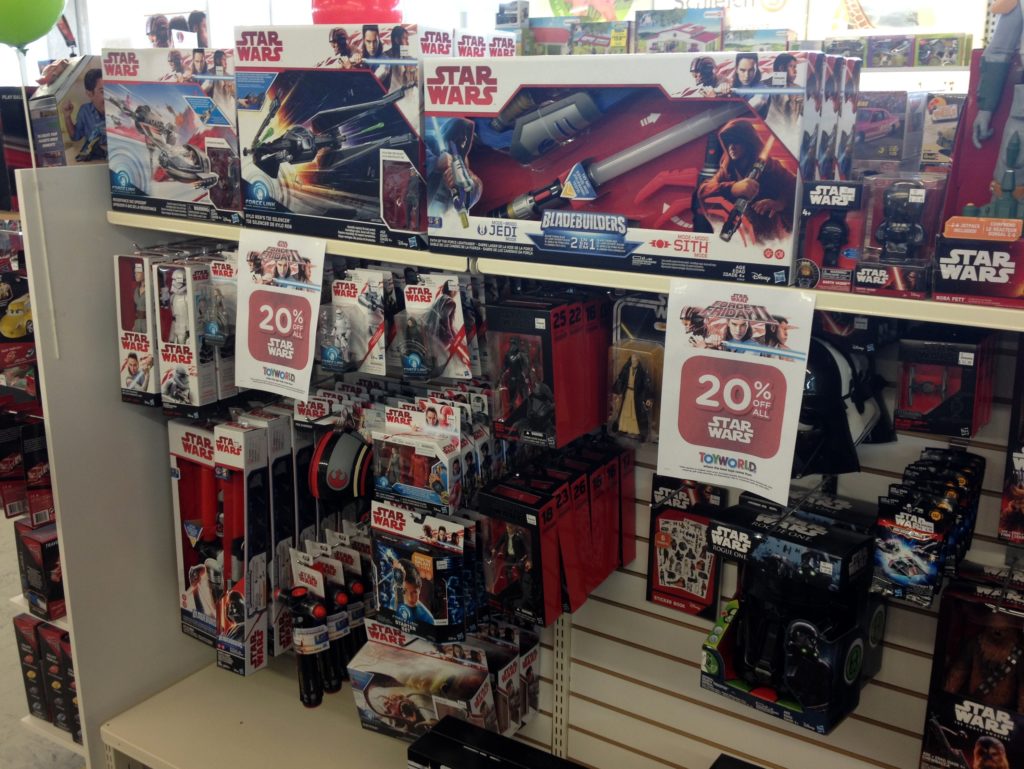 All told, the variety of Last Jedi products is only a fraction of what was out for The Force Awakens. In fact, the reduction in range very much mirrors that which occurred between The Phantom Menace and Attack of the Clones releases back in the early 2000s. Hasbro clearly trialed a number of different options back in 2015, and decided to stick with what sold best. Unfortunately, one of the victims of this attrition – the Star Wars Micro Machines line – was also the one that was closest to my heart. It had formed the backbone of my collecting since I began in the mid-’90s, and I was ecstatic to see it return in 2015 after a fifteen year absence. The writing had been on the wall for sometime however, with Force Awakens Micro Machines sets heavily discounted and still on pegs two years later, and Rogue One sets never even making it to New Zealand shores.

In fact, Force Friday II was an all-around bust for miniature vehicles of any kind; with the Titanium Series also discontinued and the Hot Wheels line (which will continue for now) not yet making an appearance in this part of the world.

In many ways we were lucky, however. As I’ve watched Force Friday II unfold around the world I’ve seen countless instances of stores in Australia, the UK, and the USA receiving little-to-no Last Jedi merchandise. While stock might have been a little slow unpacking in some local stores, all reports indicate that most New Zealand centres have received a healthy supply of product.

Last year, I pondered whether the reduction in fanfare between 2015’s Force Friday and 2016’s Rogue Friday was due to the fact that Rogue One was the first film to fall outside of the central saga, or whether it was indicative of a more general decline in excitement for new Star Wars merchandise. It seems clear now that the latter is the case. But this is to be expected. In the prequel era, new waves of film-centric merchandise came out every three years. We’ve now reduced that turnaround to only twelve months. It’s clear that, in order to avoid a glut of unmovable product, distributors and retailers will need to pace themselves.