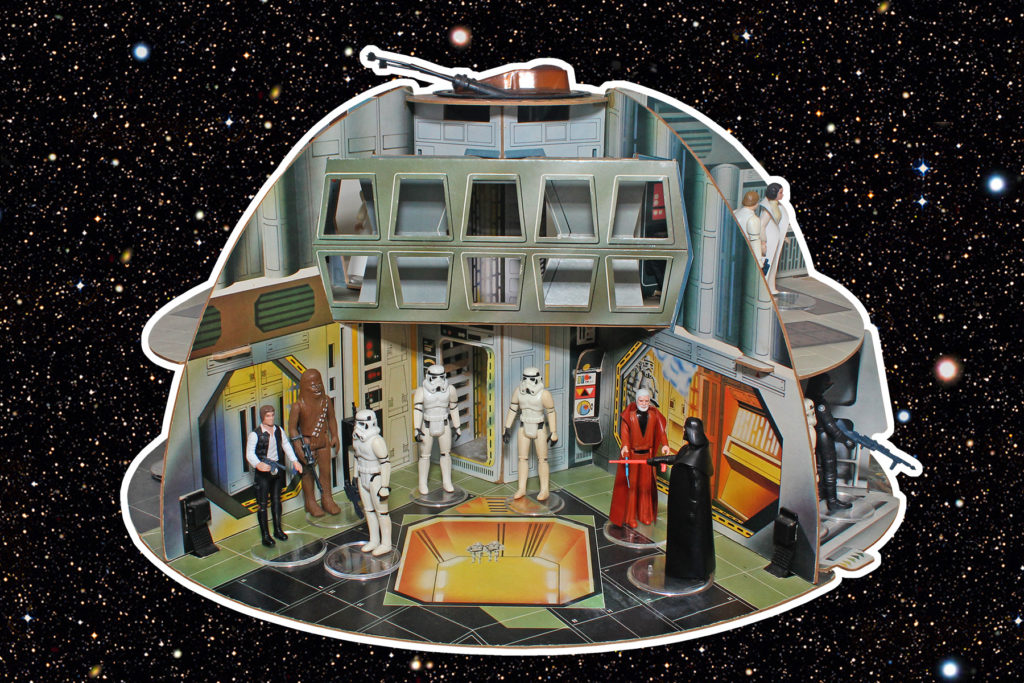 This interpretation of the Death Star, which differed significantly from the vertically-oriented playset that American kids had available to play with, was available in 5 regions, under 4 different brands. One of the earliest and possibly most well-known versions came from Palitoy, who was licensed to release Kenner products in the United Kingdom. That version was purported to have been made of a slightly lighter-weight material than those released by Toltoys in Australasia. Both New Zealand and Australian Toltoys variations exist: the main differences between these two reside in the packaging, which declared the city of manufacture (“Made in New Zealand by Toltoys N.Z. Ltd., Auckland, under licence from Kenner Products, a division of CPG Products U.S.A.”, reads the NZ box). The New Zealand packaging was also unique in that it was a 2-part box. The lid bore the colourful graphics similar to all other versions, but the bottom half of the box was plain cardboard, and hence did not have any of the decoration and imagery found on the back of the box in other countries. Because they were produced later than the Palitoy version, Toltoys boxes list that there are now 19 action figures to collect in the set (compared to the Palitoys box which encourages fans to collect “12 authentically designed figures in realistic Star Wars costumes”). 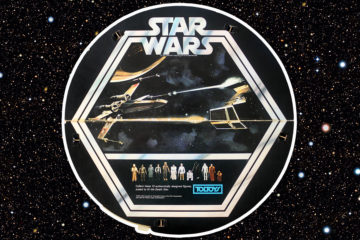 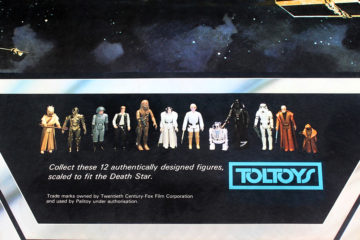 The Canadian cardboard Death Star bears the Kenner logo. It is distinct, however, in that where the other space stations had photos of an X-wing vs Vader TIE-Fighter battle on the underside of the base, as well as photographs of the first 12 3.75-inch scale figures, the version released in Canada had only a marbled pattern (similar to what you might find on the back of a board game). Further, being released in a bilingual country, the trash compactor chute within the playset had to have both English and French signage! The Canadian Kenner Death Star was predominantly available through the Sears department store chain, but small numbers were sold through other retail outlets. Some instances of this product included a pair of Stormtrooper figures as a bonus! 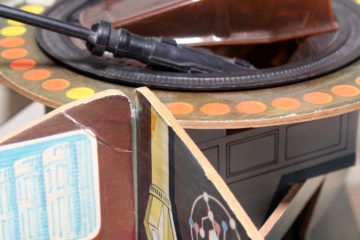 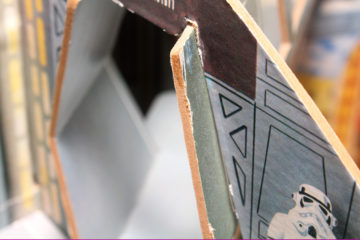 And to complete the set, there was a version from France, released by French toy licensee, Meccano. Rather than its trademarked English name, its packaging referred to it in French, i.e., as the “étoile noire”, or “Black Star”. Because the playset itself was identical to the Palitoy version, it featured only English-language labels on the Death Star graphics (whereas the Canadian version had bilingual labels, to cater to both English and French-speaking Imperials). Meccano product seems to be available in far smaller numbers. 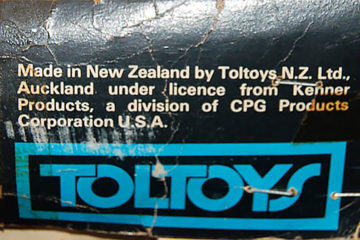 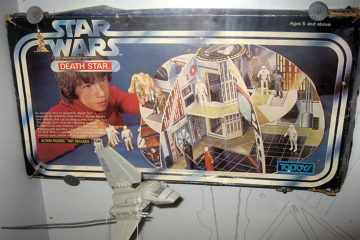 Tour of the Toltoys Death Star

Replete with a cast of a couple of dozen vintage figures, this is a closer look at the Toltoys NZ version of the cardboard Death Star.

This hemispherical playset is divided up into 5 sectors. Some of these sections represent sets from the Star Wars movie… others originated from the minds of the toymakers. The largest sector is often referred to as the ‘Hangar’. Instead of a second floor like the other chambers, the hangar is bridged by a hexagonal tunnel that intersects the central tower. Two faux doors decorate the opposing walls, leaving our plastic heroes only one means of escape, into the Death Star core!

The core tower that runs up the centre of the playset is a little tight for effective play. This is unfortunate, because on the second level, the two doorways (one from the hangar tunnel) have small balconies, allowing the re-creation of Luke and Leia’s perilous escape across the chasm. The bottom of the chasm shaft has mirrored stickers in place, to simulate the perilous and near-bottomless nature of its architecture. The playset instructions proclaim that the Tractor Beam resides in this central column. 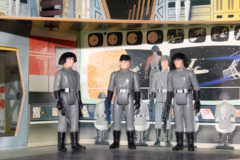 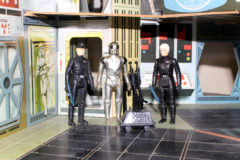 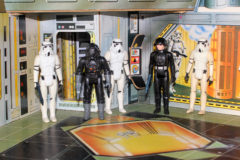 Moving clockwise around the space station, we see on our right a 2-level sector with a command centre on the ground level, and the cell-block antechamber atop (referred to as the “Guard Room” in the playset instructions). It is clear from this perspective that the hexagonal tunnel, visible from the hangar, joins the prison antechamber with Princess Leia’s cell. 2-dimensional stormtrooper artwork forms the basis of a prison guard, whilst below in the command room, similarly planar Death Squad Commanders man the computer consoles. It is interesting that such characters that are elements of the artwork are not movie accurate, but perhaps more aptly, are close representations of the vintage figures themselves. 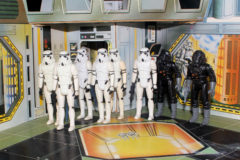 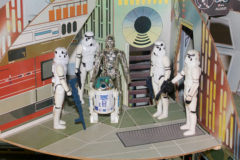 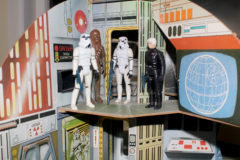 The two rooms in the next sector (clockwise again) are a little more generic. A couple of features do characterise them though: a ladder on the surface of the central core joins the upper and lower decks, and the lower deck, which has a standard door through to the command centre, is almost completely open to its leftward neighbour. This highlights the fact that this playset is not merely a grouping of identically laid out compartments, but is instead an imaginative and varied construction. 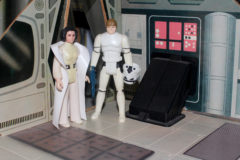 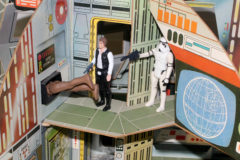 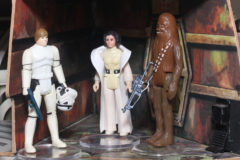 We move next into a slightly more open configuration. This room has but a mere walkway for its upper level, which comprises the second access point to the ‘swing across the chasm’. This whole section, and the generic rooms described above, are officially denoted “the Main Complex”. Another memorable scene resides between these cardboard walls: having escaped the prison chambers, Leia directs her rescuers down a plastic garbage chute. Unlike the movie version, this escape route is clearly sign-posted. Would you willingly jump through a small hole marked ‘trash compactor’? …those stormtroopers behind you aren’t shooting straight enough to hit you anyway!

Immediately below, a wide-open arena is the room into which the trash compactor exits (if you can get the pop-out cardboard door open in time…otherwise “one thing’s for sure; we’re all going to be a lot thinner”). 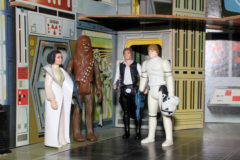 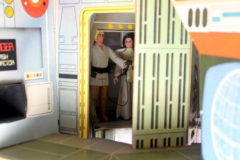 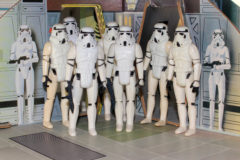 Two important compartments complete the playset. Arranged vertically, we conclude the tour with a visit to cell number 2187 (of Detention Block AA-23), and the famous Trash Compactor (number 3263827, for those of you interested in numerical trivia). The Trash Compactor is one of the more interactive sections of the Death Star’s offerings. A clever design means that wall of the garbage compactor is movable, allowing kids of all ages to recreate that particularly dramatic and seemingly inescapable crisis. 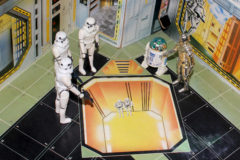 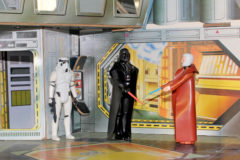 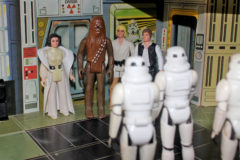 Princess Leia’s prison chamber is a simple little cell, with expected bed represented by a 2-dimensional image on the floor, and a plastic garbage chute protruding from one wall, highlighting the fact that the garbage repository lies below. Curiously, this prison has no door. 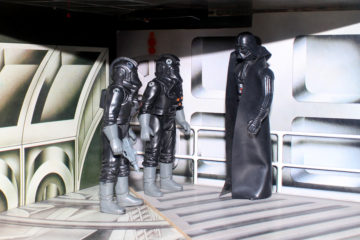 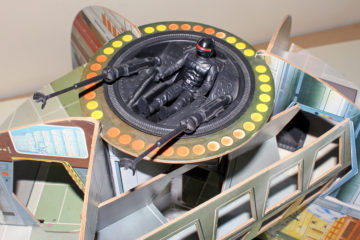 Although a couple of minor playsets from the modern age of collectibles, have since featured Death Star elements, the Imperial Space Station has yet to be re-imagined to this extent by Hasbro. Should that day come, I hold no fear that 1970’s cardboard version will be unable to retain its value to collectors, its library of nostalgic memories, and its title as the Vintage Playset Heavyweight Champion! 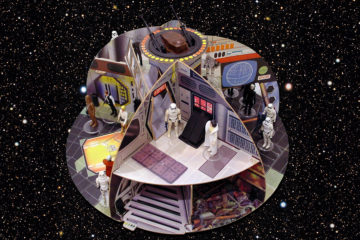 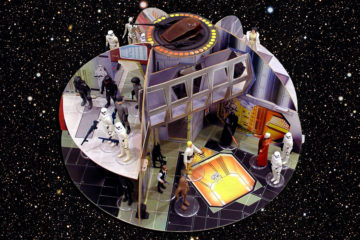 Celebrate the cardboard Death Star with apparel from ‘Toys on a Shirt’.

Previous: Toys on a Shirt
Next: Star Wars Easter Egg Line-Up at The Warehouse