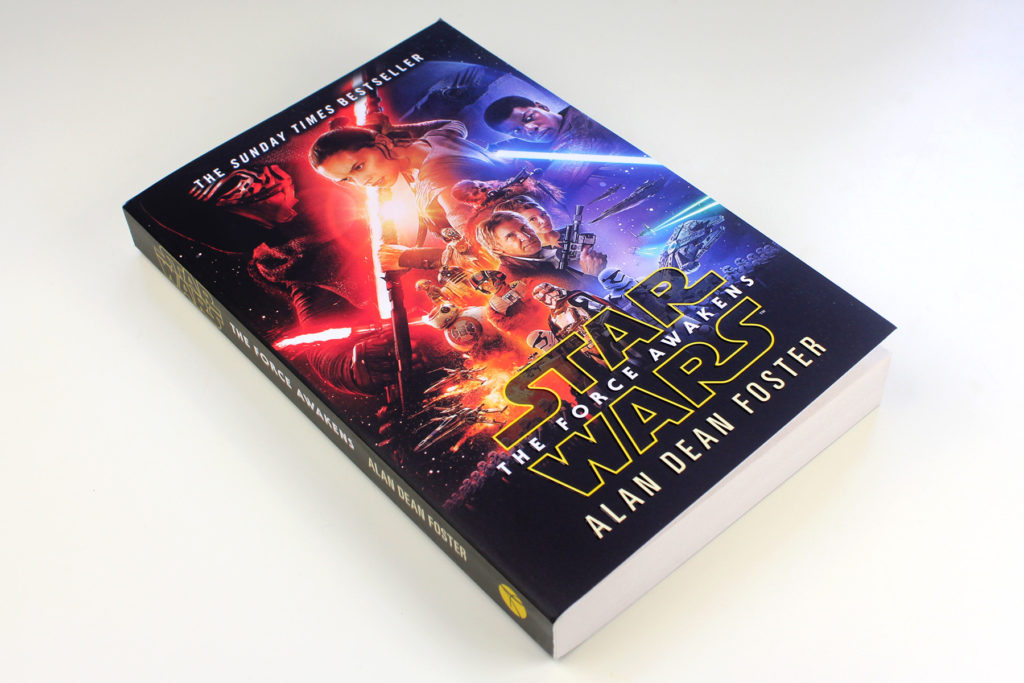 The novelisation of Star Wars Episode VII: The Force Awakens is penned by prolific sci-fi author Alan Dean Foster. Few are as qualified to take on the task of committing the tale of the latest Star Wars movie to a written form – although George Lucas was credited as the author of the official novel adaptation of Star Wars Episode IV: A New Hope, it was in reality ghost-written by Alan Dean Foster, who went on to write the first Expanded Universe novel, Splinter of the Mind’s Eye in 1978. Foster also contributed to the Star Wars library with Republic-era novel The Approaching Storm in 2002. I’m personally a fan of all of those Star Wars novels, as well as of many of Alan Dean Foster’s non-Star Wars titles (he’s done other movie novelisations, as well as an array of original/independent works), so was happy to hear of his involvement in this Episode 7 publication, and was not disappointed as I eagerly read my way through it.

The hardcover version of the TFA novel came out in January of this year, and the 301 page paperback version (which is the edition reviewed here) has only just been released. This was the first time that a Star Wars novelisation was not available until after the general release of its respective movie. The question on the mind of many fan’s minds therefore, I imagine, is “why read the novel when I’ve already seen the film many times?”

My first response is that doesn’t make it any less enjoyable. Most of the scenes and dialogue are indeed familiar, to the point where I was hearing/reading them in the respective actor’s voice, but the writing style is still very engaging, and the pacing is quite different in the written format, with greater or lesser emphasis given to different scenes to ensure they translate well and keep the momentum of the storytelling flowing along.

The second part of the answer to that question is perhaps an even bigger justification – the novelisation contains at least a dozen sections of content additional to that drawn directly from the movie, ranging from brief adjunctive conversations or interactions, through the occasional explanation of technology or phenomena, to some quite extended additional passages. The book opens in this manner, in fact, with exposition from Leia’s point of view as she ruminates having recently sent Resistance pilot Poe Dameron off on a mission to track down Luke Skywalker. The last Star Wars book I read was Bloodline, by Claudia Gray, which is a Leia Organa-centric story that precedes The Force Awakens, so I ended up experiencing quite a connection between those two components of the Star Wars canon. I welcomed the fact that some of the additional content is the re-integration of deleted scenes that didn’t make it into the final cut of the movie… to a degree, I lament that so much filmed material wasn’t actually seen on the big screen.

This adaptation of The Force Awakens is an enjoyable read that captures the action and excitement of a film we had been eagerly anticipating for a number of years. The book stays true to the emotion and character portrayals of the film, and even expands on this with additional information and explanation that fans should find satisfying. Alan Dean Foster’s style is familiar, and thoroughly apt for a Star Wars movie adaptation. This book rates two thumbs (or droid blow-torch attachments) up, and upon finishing it, felt a sense of urgency to go and watch the Blu-Ray yet another time.

Check out availability at a range of books sellers, and compare prices (starting at NZ$12.19 at the time of writing) through SocialBookCo. SocialBookCo is a price comparator service that can help you find the best value on the the books you’re after.

The book has been supplied by SocialBookCo for review purposes.