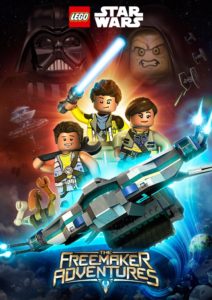 It’s been rumoured for a while now, but yesterday StarWars.com confirmed that a brand new Lego Star Wars series entitled “The Freemaker Adventures” will be debuting on Disney XD this summer. Specific details are still thin on the ground, but the official site has posted the following synopsis for the show:

The fun-filled adventure comedy series, set between The Empire Strikes Back and Return of the Jedi, will introduce all-new heroes and villains in exciting adventures with many familiar Star Wars characters. Told in the whimsically-charged style that audiences have come to expect from LEGO Star Wars entertainment, the series stars the Freemakers, a family of scavengers who build and sell starships from the scoured debris of space battles strewn throughout the galaxy. When their youngest discovers a natural connection with the Force through an ancient artifact—the Kyber Saber—his world is turned upside down, and he and his family are thrown into an epic struggle against the Empire to restore peace and freedom to the galaxy. Throughout their adventures, the Freemakers explore new worlds, meet new and familiar characters, and learn the true value of what it means to be a family.

Previous Lego Star Wars projects have been a lot fun – playing out some great “what if?” scenarios while bringing a unique sense of humour to that galaxy far, far away. Given this, there’s little doubt that The Freemaker Adventures will be well worth a watch.