The Ultimate Star Wars and Philosophy

‘The Ultimate Star Wars and Philosophy’, a new book from Blackwell Philosophy and Pop Culture, features a chapter contribution by SWNZ staff author Archon Revuge. Check it out at Book Depository (free shipping to NZ).

Does it take faith to be a Jedi? Are droids capable of thought? Should Jar Jar Binks be held responsible for the rise of the Empire? Presenting entirely new essays, no aspect of the myth and magic of George Lucas s creation is left philosophically unexamined in The Ultimate Star Wars and Philosophy. * The editors of the original Star Wars and Philosophy strike back in this Ultimate volume that encompasses the complete Star Wars universe * Presents the most far-reaching examination of the philosophy behind Star Wars includes coverage of the entire film catalogue to date as well as the Expanded Universe of novels, comics, television series, games and toys * Provides serious explorations into the deeper meaning of George Lucas s philosophically rich creation * Topics explored include the moral code of bounty-hunter favourite Boba Fett, Stoicism and the Jedi Order, the nature of the Dark Side, Anakin and Achilles in a nihilism face-off, feminism and being chained to a giant slug, cloning, de-extinction, fatherhood, Wookiees, loyalty, betrayal, guardians, republics, tyrants, terrorism, civic duty, friendship, family, and more!

The Ultimate Star Wars and Philosophy – NZ$22.16 each (price correct at time of writing) 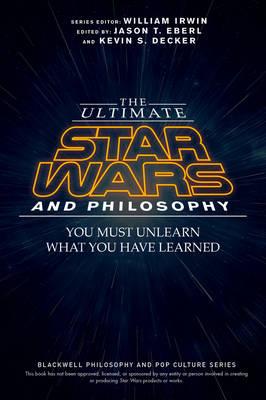 Photo sourced from and belongs to Book Depository.