SWNZ staff members Matt and Kristy Glasgow were featured in a ‘North Shore Times’ newspaper article today, about their love of Star Wars. In time for the upcoming ‘Star Wars Day’ on May 4th, the article also talks about the Star Wars costuming clubs attending the Armageddon Expo at Hamilton later in the month (May 24th and 25th).

Kristy was a Jedi and Matt was a Stormtrooper when they first met.

Now they’re married and once again dusting off their shiny white body armour, black stockings and blasters for the Armageddon expo in Hamilton on May 24 and 25.

The Glasgows, who live on Auckland’s North Shore, will join about a dozen members of the New Zealand garrison of the 501st Legion dressed as Star Wars characters during the event in Hamilton.

Fans around the world are also preparing to celebrate Star Wars Day, aka May the Fourth, this Sunday. 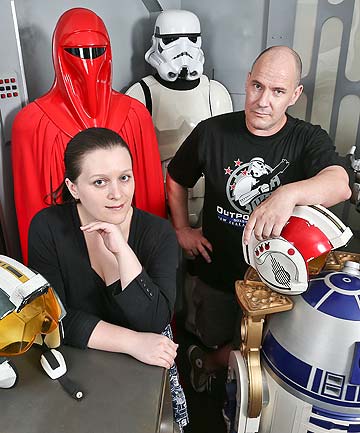 Photo sourced from and belongs to Chris Skelton/Stuff/North Shore Times.

TOPICS Local MediaSWNZ in the Media