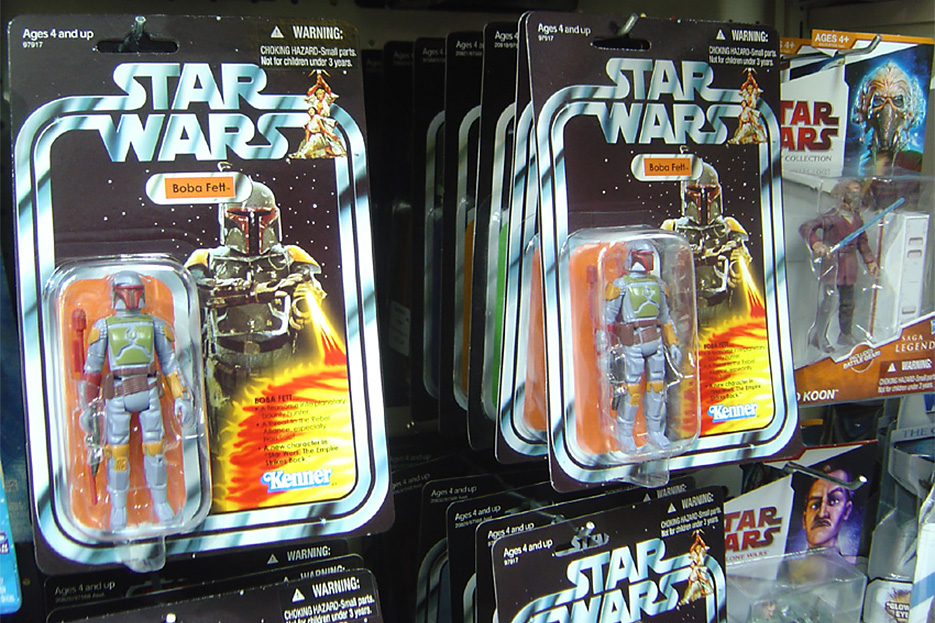 The 2010 rocket-firing Boba Fett action figure is an exclusive product initially revealed at the 2010 New York Toy Fair, created by Hasbro to re-create the famous but unproduced projectile-launching toy from 1979. It very closely resembles the standard 1980 Kenner Boba Fett action figure, and incorporates a slightly different rocket system to the prototypes of the unreleased firing version. It is an exciting product, particularly for adult collectors who had the standard Fett as a child, and/or who have coveted the very rare and expensive firing prototypes and samples. In the US, it is (at the time of writing) available as a mail-in offer…an offer that does not extend to other countries. Fortunately, the Farmers chain of department stores took position to make it available as an offer through their branches. In fact, the conditions of their offer are considerably more generous than those necessary to get the figure in the US. Locally, we only have/had to spend $25 on other Hasbro Star Wars products (between 22 Sep and 11 Oct 2010), and the figure is free to take home on the spot (in the US, a purchase of 5 figures was required, as was an additional handling/shipping fee…and there were reports of many arriving through the post with severely damaged packaging). The Farmers chain have significantly endeared themselves to collectors with this bargain, and it is the second such offer they have provided in recent memory (the Nahdar Vebb Clone Wars figure was available circa April 2010). 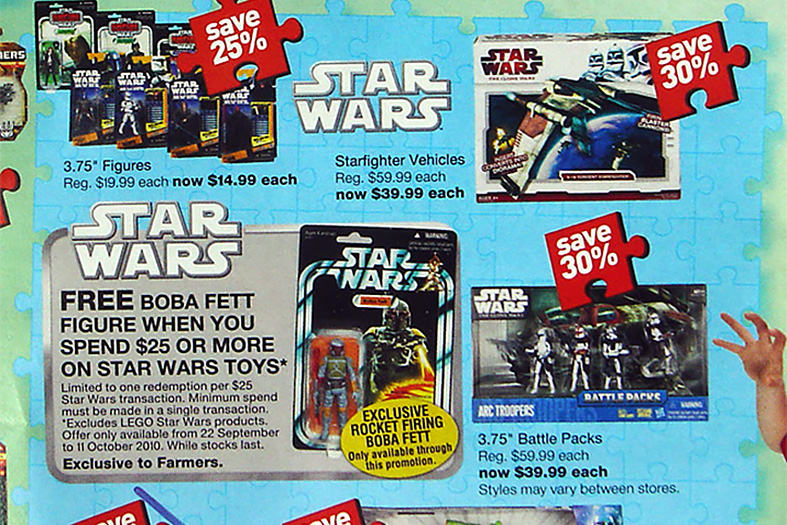 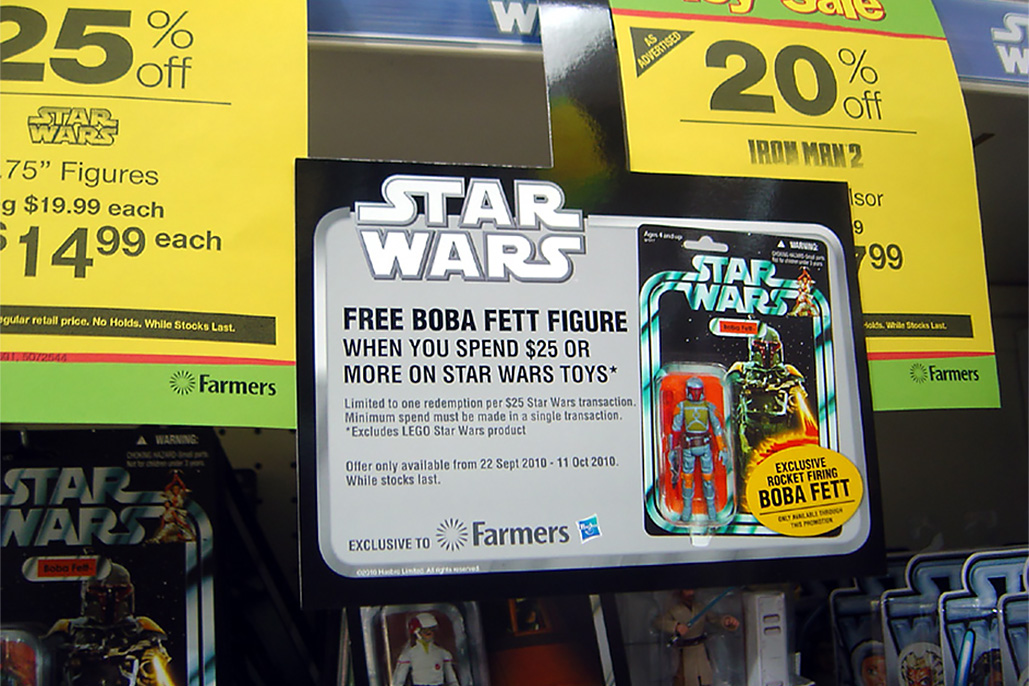 This re-release version comes with two different rockets – one long, child-safe version that actually fires, and a smaller, non-firing missile that resembles the vintage incarnation. There are a few additional, subtle alterations that distinguish the 2010 and 1980 variants (pictures below), such as a minor height difference, and some minor evolution of the sculpt (eg, chest armour detailing) and paint application (notably, the jet-pack). The new figures will also, of course, be free from fading, paint wear, or limbs loosened through decades of play. Finally, the embossed copyright lettering on the standard 1980 figure is absent on its modern counterpart (it is also generally absent from the vintage prototypes), and the peg-holes in the feet differ slightly in size/configuration. 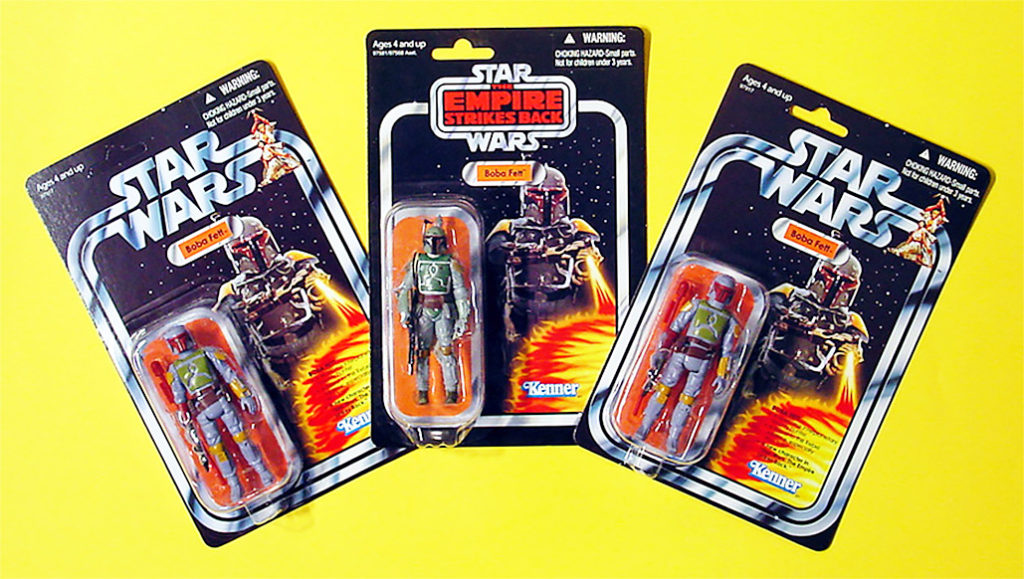 The original (Kenner) 1979 rocket-firing Boba Fett is the subject of a curious history (The Star Wars Collector Archive has good coverage of the events). It was originally to be available as a mail-in offer but, following the tragic death of a child in association with a Mattel Battlestar Galactica toy that featured “space missiles”, the industry promptly moved away from such choking hazards, and Kenner removed the firing feature from their upcoming Fett figure. Despite the occasional claim to the contrary, no figures were ever mailed out with the firing mechanism intact – prototypes and samples, however, are known to exist in the hands of collectors. At the Lucasfilm Celebration III event, CloudCity.com had on display an impressive selection of such prototypes. There is also a good article on the available prototypes, their respective features, and clues to recognize forgeries, at 12back.com. 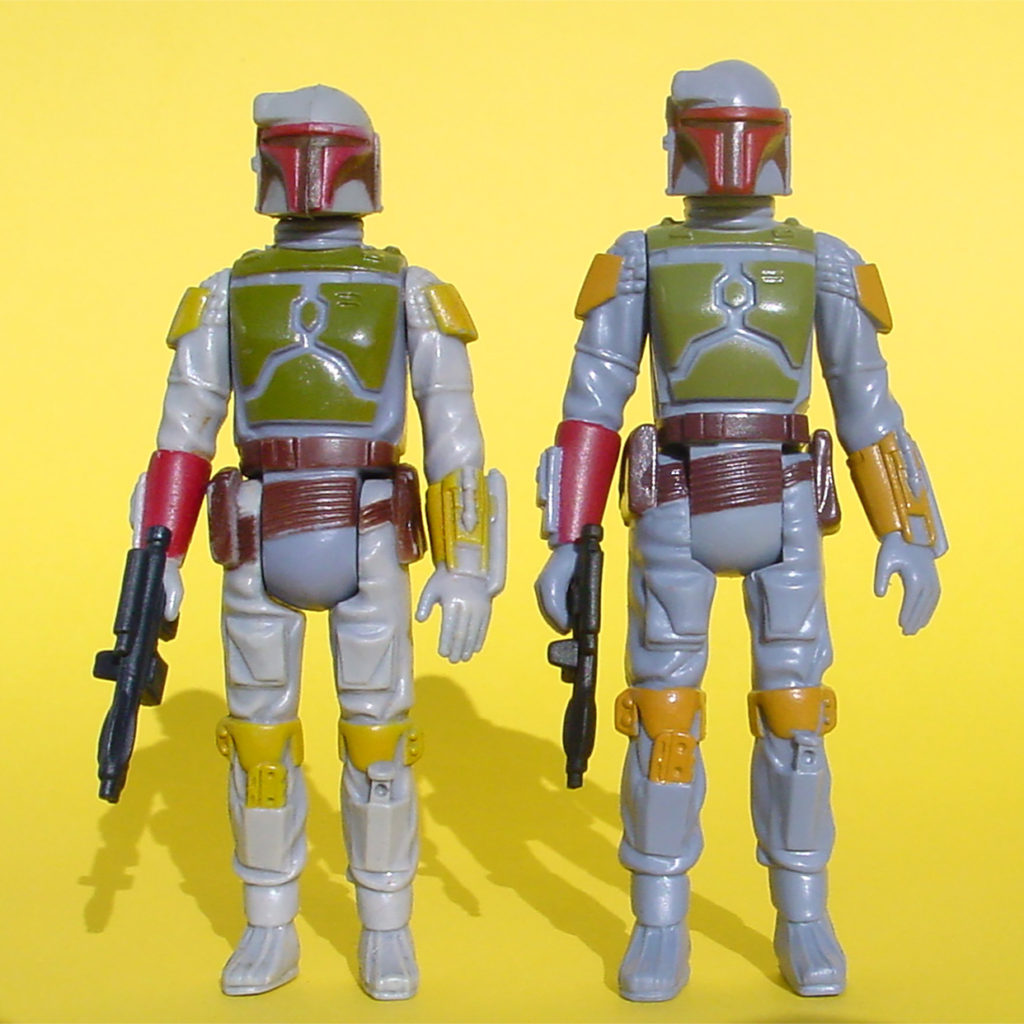 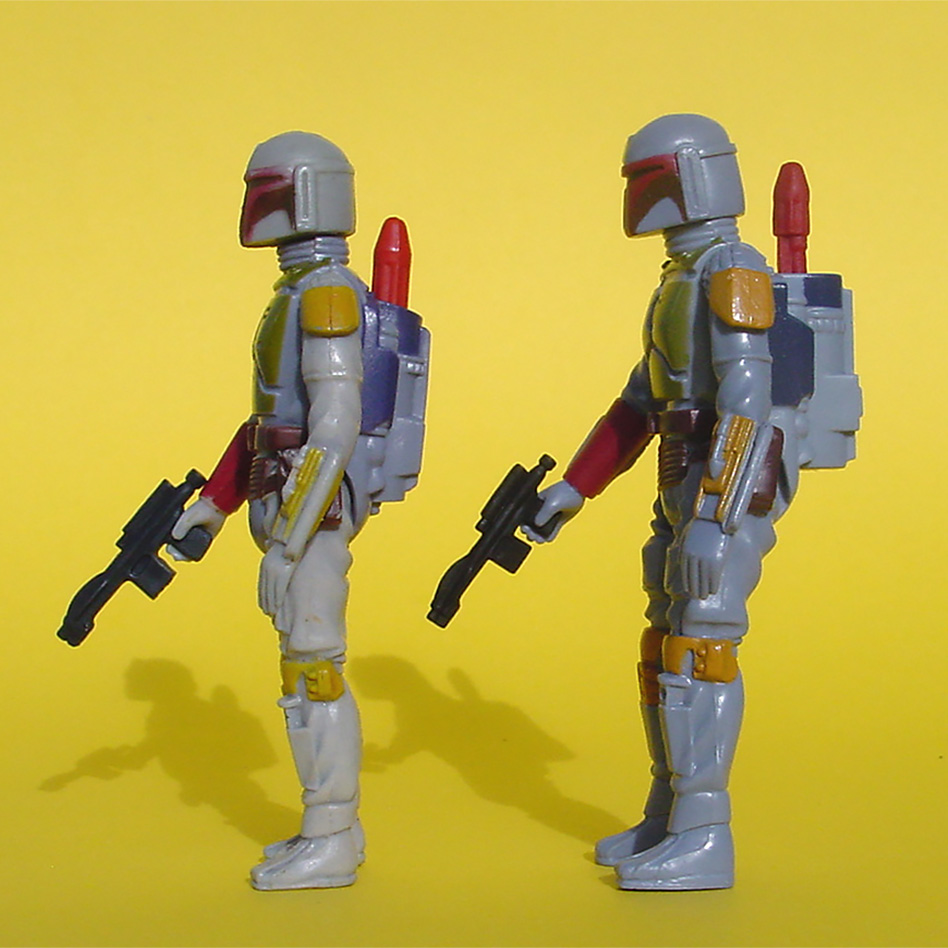 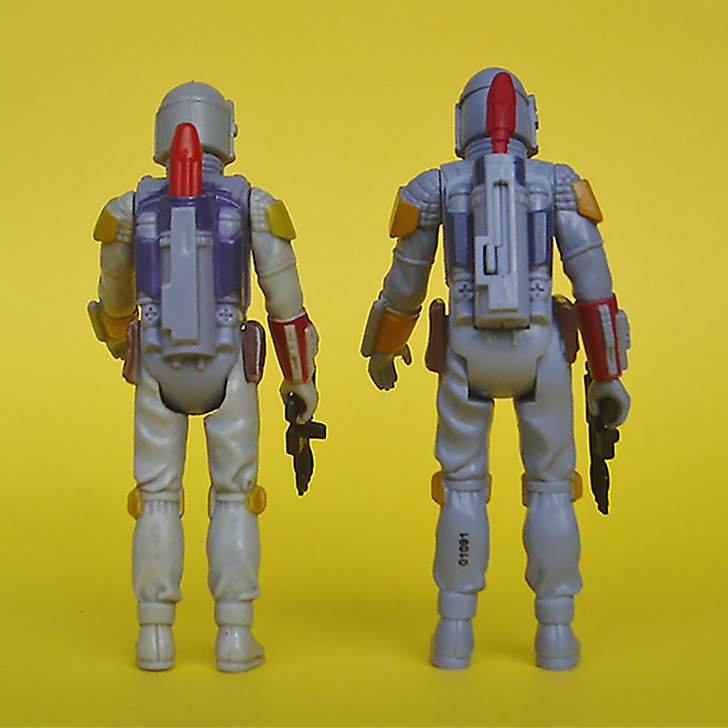 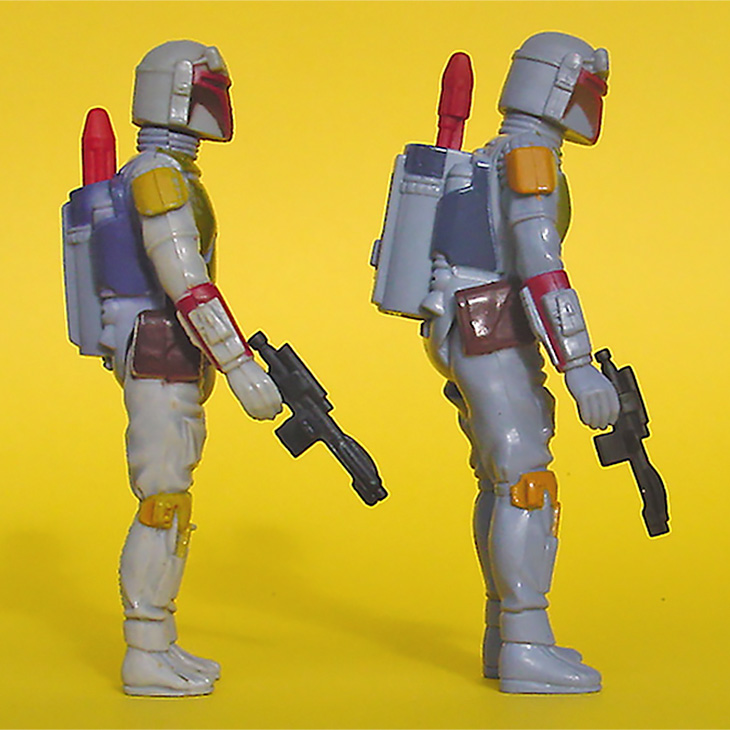 Although not exhaustively identical to its vintage predecessors, the 2010 rocket-firing Boba Fett action figure is a very good proxy for the original, and is sure to be a hit amongst the established collector. I’m personally very pleased to add this replica to my collection – thanks Hasbro, and thanks Farmers! 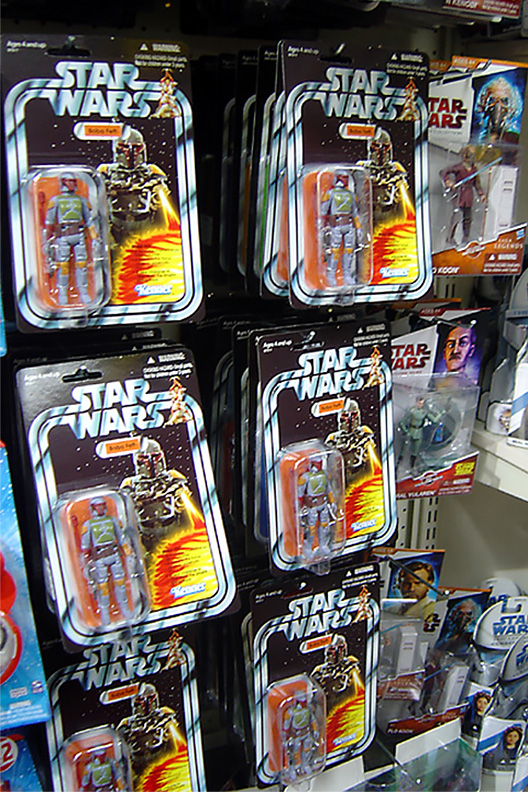 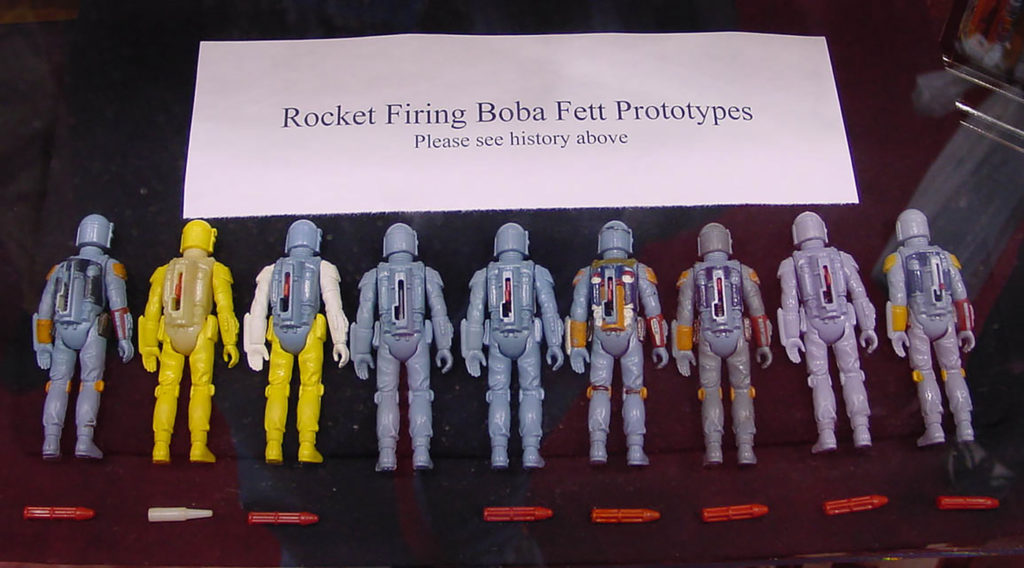