TV Alert – Heart of an Empire 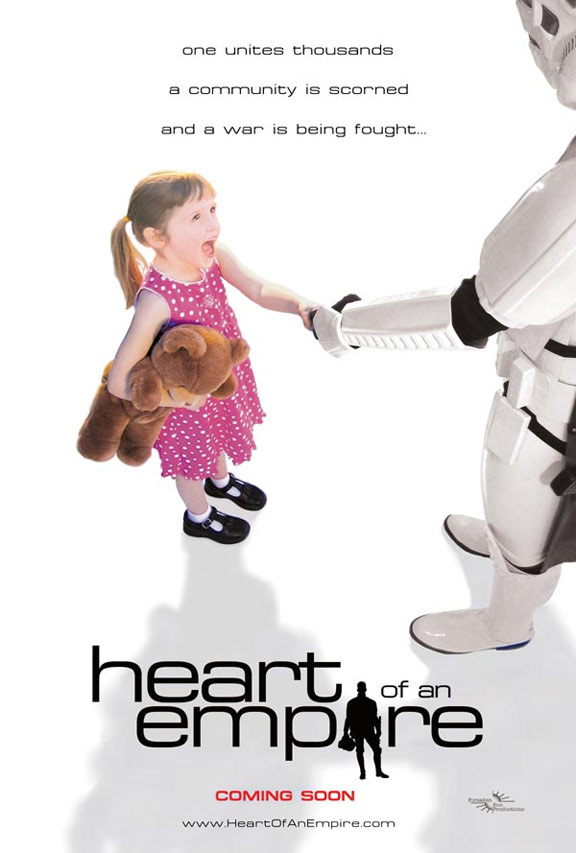 The following is a press release/announcement from the Documentary Channel (channel 74 on SkyTV):

The Star Wars films are known and adored the world over – for many they are the greatest movies of all time. For Albin Johnson – they became a way of life.

In 1997, Albin founded a small club for fans of the Star Wars Trilogy, inspired by what he saw on the movie screen as a child. They created authentic-looking costumes of the film’s Imperial forces, including iconic figures icons such Darth Vader and the Storm Troopers. Albin called his fan boys the “Fighting 501st Legion”.

Within 11 years, the club’s membership had nearly 4000 active members representing over 40 nations globally, from all walks of life, ages, social backgrounds and cultures. Albin led the group to become a high profile media sensation. What sets them apart from other Star Wars obsessives is an unwavering commitment to using their iconic characters for charity work. They visit children’s hospitals and participate in public events, often going to extremes such as running the New York Marathon in full regalia to raise money for those in need.

As they fully immerse themselves in their obsessions, this documentary explores the reasons why these adults choose to dress in costumes of science-fiction characters. What do they gain from it? How do the general public and media receive them? What is the social impact?

We hear from the club’s members, representatives of Lucasfilm Ltd., actors of the original trilogy, and a professor of Psychology who all try to shed light on the phenomenon.

Finally we bare witness to an incredibly ironic twist of fate that will reveal what really lies at the heart of the Empire.

“a sweetly clear-blue sky piece of filmmaking, and encapsulates a rare breath of gee-whiz, irony-and-politic-free perspective that could do the world some good.” DVDtalk.com

Previous: Daniel Falconer – Artist and Designer
Next: Around the Web – GalacticBinder.com