Book Review – When the Force Isn’t With You 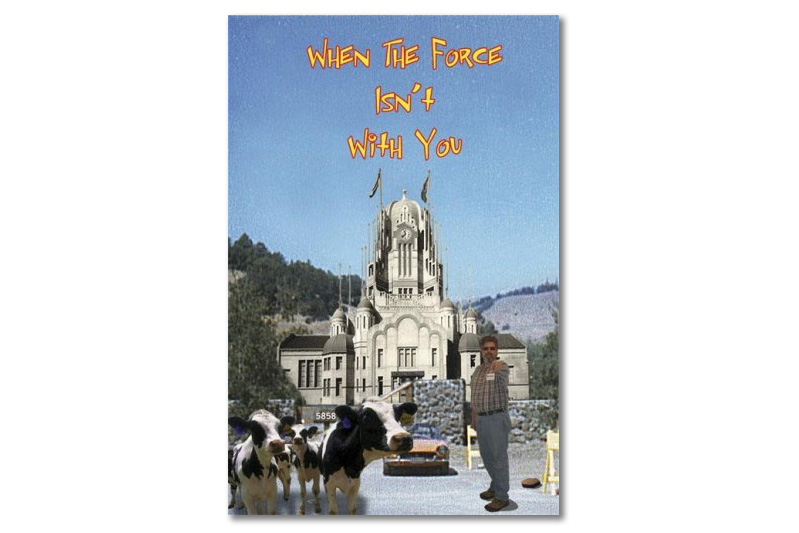 Richard Neumann, the author of When the Force Isn’t With You, warns us early on that the writing style employed to communicate his tale is loose and meandering. Don’t let this put you off – it works well as the collected anecdotes weave their way across the decades since Star Wars, with the threads given commonality through a shared objective: the pursuit of a dream. This is not a book about Star Wars, George Lucas or ILM. It does, however, touch on all of these entities; on a recurring basis and in a way that Star Wars fans will easily relate to.

During the journey we are taken along to visit and find out the meaning of The Egg Company, past the facade of Kerner Optical Labs, and even to lunch at Skywalker Ranch. The author’s goal on his labyrinthine journey? To secure employment somewhere in the Empire of Lucas. We follow the ups-and-downs of his career and life, repeatedly brushing tantalisingly close to Lucasfilm…but the receipt of rejection letters from various LFL human resource departments is a sustained theme. Will his sheer persistence (categorically distinguished from stalking!) win him the desired trophy? How will, to quote directly, “120,000 cows and one very persistent stone” play their role…?

The autobiographical adventure is punctuated with trivia from a multitude of fields. You’ll find yourself accidentally learning about George Lucas’s adroitness for architecture, the selling points of the Daimler SP250, the link between THX1138 and Gattaca, and history behind the digital watch. The resulting narrative flows with a cadence that carries the reader easily from event to event. The unpredictability of the succedent chapters and story elements calls the reader back, ensuring that their attention is held right to the very end.

When the Force Isn’t With You is independently published – an achievement tied to the plot of the book itself. It lacks the bullet-proof editing one might see in the product of a global publishing company, but this adds to its charm, and conveys an honesty that further engages the reader. This is unlikely the sort of book I would have read if it hadn’t been recommended to me. But, the short version of the review is that I was entertained from cover to cover – it has injected variety in to my library, and maybe added a little bit of motivation to my life. So I am passing on that recommendation – this book is for anyone who has ever had a dream. Enjoy Rich’s memoirs, and in doing so, let them encourage you to do something about the pursuit of your dream, today.

Information on purchasing When the Force Isn’t With You can be found online at Stone in the Surf Press.