Figure of the Month – Vintage C-3PO 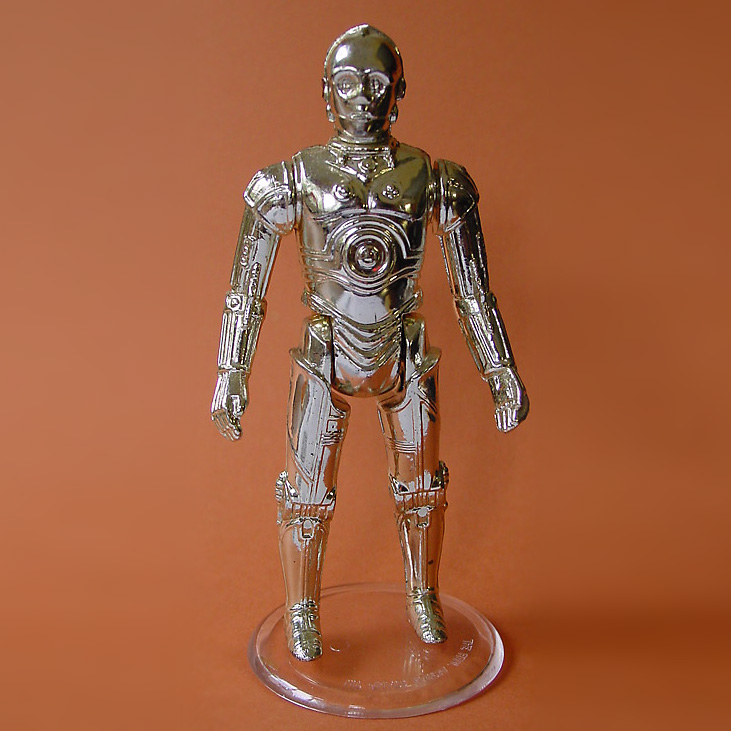 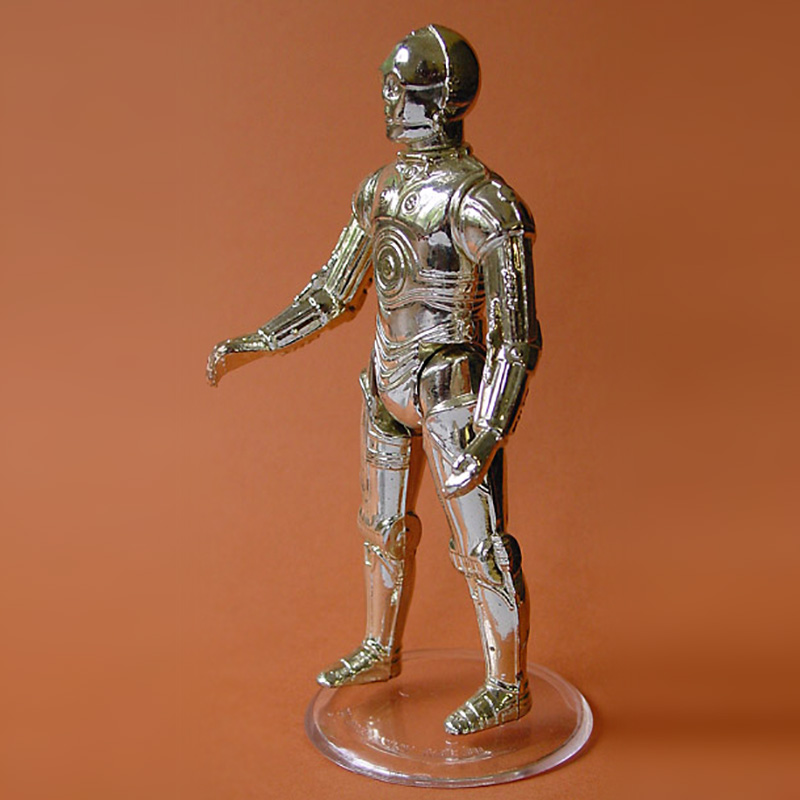 The ‘Figure of the Month’ is a new semi-regular SWNZ feature, wherein we take an up close look at a selected character collectible, focusing on interesting features of both the toy and its on-screen persona. We don’t aim to compile an extensive database about all available Star Wars figures, but make a choice based on elements of interest to hopefully expose readers to different collectibles, or new directions of collecting. Today, we take a look at one of the oldest of Star Wars toys – the See Threepio mini-action figure from Kenner’s “first twelve”.

In early 1978, shortly after Star Wars changed the face of big-screen sci-fi, George Lucas began his second marketing coup with the reinvention of boys’ toys – the Star Wars mini-action figure line from Kenner was the first character replica to easily fit in your pocket. The first wave of 12 figures hit the market a little later than might have been ideal, but it wasn’t long before the number of Star Wars mini-action figures outnumbered the head-count of children in America. 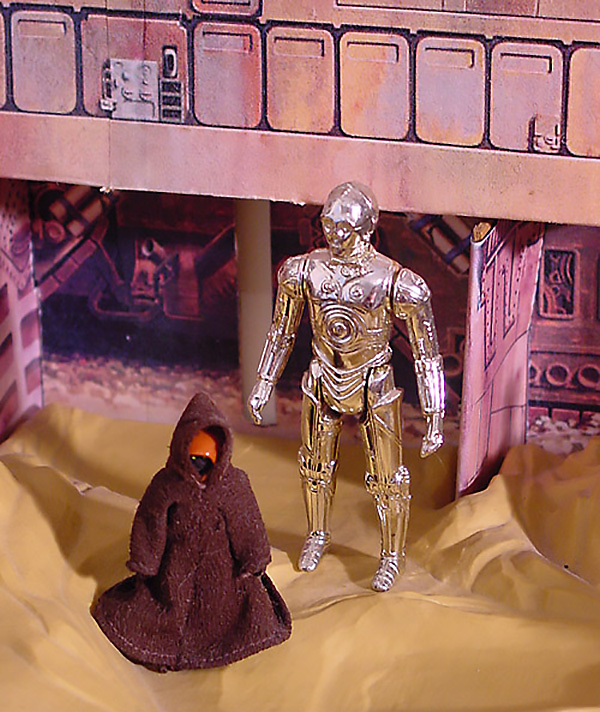 The sculpting of the early figures was basic at best… but that’s where childhood imagination is supposed to come into play! Out of the first wave of heroes and villains, See-Threepio’s rigid posture actually lent itself fairly well to this tiny incarnation, and his metallised golden finish helped obfuscate the lack of detail. And, an advantage of sorts for the glass-half-full crowd, he came sans accessories, so there was no miniature blaster to loose to the vacuum cleaner. Threepio came initially came on either a Star Wars card, followed in 1980 by an Empire Strikes Back card. The “removable limb” version also came on an ESB card, as well as ROTJ and POTF cards in subsequent years. Over in Australia, Toltoys provided another way to acquire the protocol droid – as a special “mini-action figures included” offer with the Landspeeder vehicle (this was actually how 3PO came into my collection – my second Star Wars figure acquisition, following shortly after my 12-back Imperial Stormtrooper). 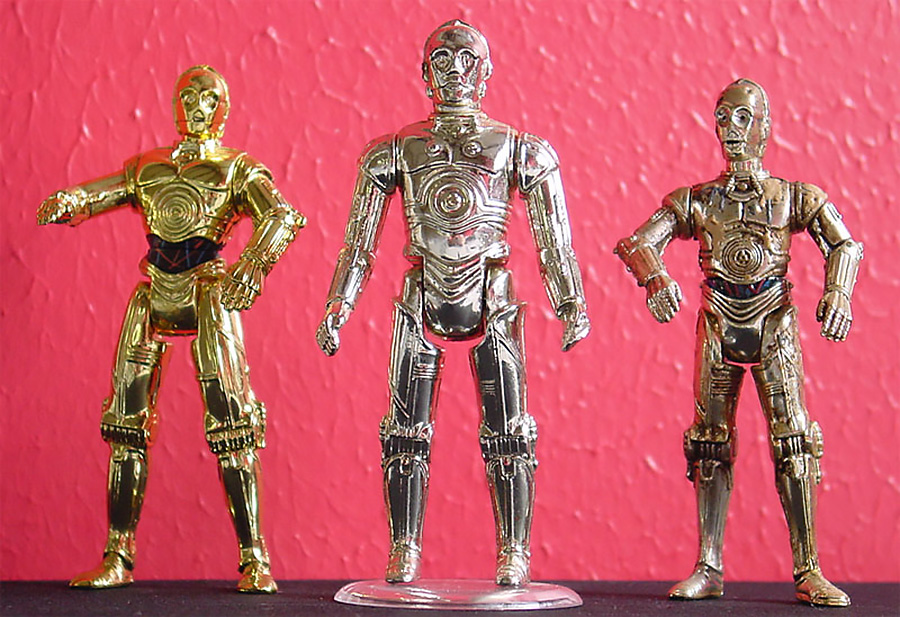 Since the vintage era, Threepio has been redone and re-released many times, with slight variations in accuracy and decor each iteration. Vintage 3PO is a little larger than the more recent sculpts, as the latter versions have become progressively more in scale with the other figures of the Star Wars line-up. The above image is a comparison with (on the left) the very golden 1995 POTF2 release from Kenner, along with (on the right) the 1999 Flashback figure that also came with a removable left arm, and a lot more weathered finish. Below, 3PO comes up against the 2004 tribute to the original Vintage figures – in all cases, the protocol droid has had to live with a mere 5 points of articulation (until the 2006 Saga Collection release, where he could flex his knees to sit on the Ewok-constructed throne). As perhaps one of the figures with the least changes over his 30 year history, he’s undeniably a staple character of iconic bearing. 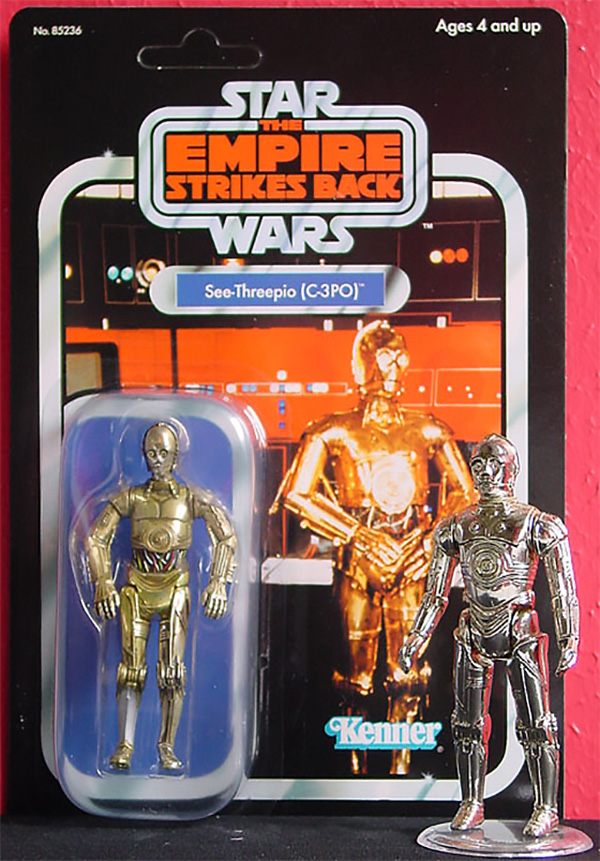