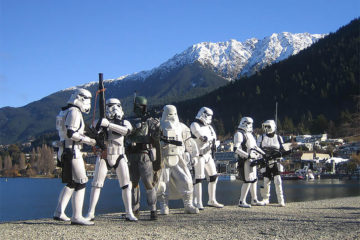 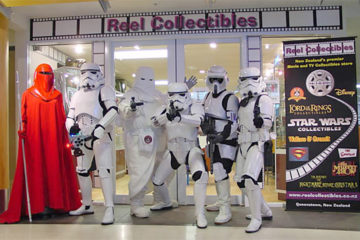 Owning and operating Reel Collectibles, and being New Zealand’s premier source of Star Wars Collectibles, means we have quickly formed great friendships with many of the New Zealand 501st Garrison, Outpost 42. So when we invited them to come down and represent the 501st and Reel Collectibles at the Queenstown Winter Festival, it didn’t take much arm twisting to convince them! 8 members came down, plus we had a spare costume, so we ended up with Boba Fett, a Scout Trooper, a Royal Guard, 5 Stormtroopers and fittingly, NZ’s first 501st Snowtrooper.

Some of the troops had never visited Queenstown before, and Queenstown really turned it on for them, with stunning crisp, clear days (albeit freezing!) and typical Queenstown hospitality, and Winter Festival fun. We’re quite convinced that Mark (TK-4574) is the only person to come into Queenstown in winter with a Snowboard bag that didn’t contain a Snowboard, instead a Stormtrooper blaster! 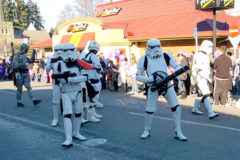 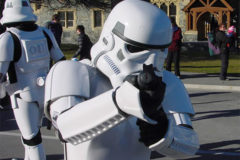 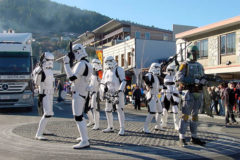 Saturday kicked off with the troops getting ready for the Family Fun Float Parade, with some iconic Queenstown photos being taken before the parade even started, of which many turned up as official photos on the Winter Festival website, Southland Times, Otago Daily Times and Queenstown local papers. The troops were a huge hit in the parade, interacting with the crowd and often holding up the procession due to the many fans who wanted a photo opportunity. 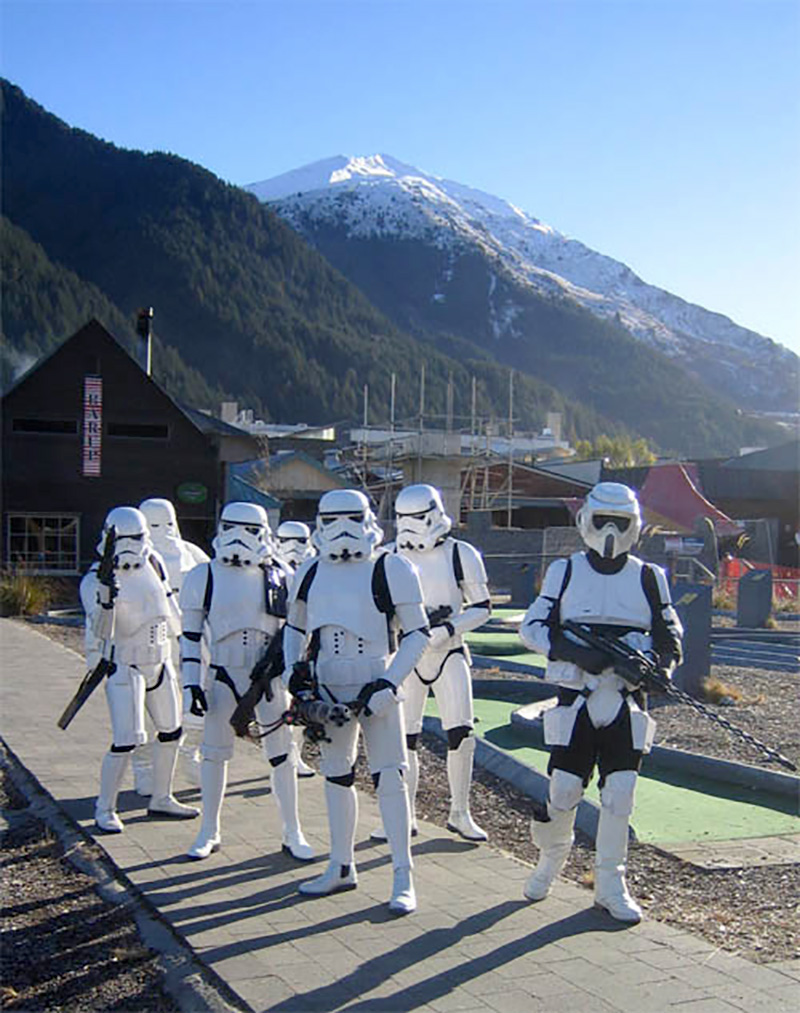 We then had a quick break for a bite to eat before the hordes of Queenstown locals arrived at the Reel Collectibles store for a personal photo opportunity. We had told all our local customers and advised the local schools etc of the 501st arrival, so literally hundreds of young Jedi arrived at the store in the afternoon to get a photo. You can check out many of the photos and the crowds here and if you were in Queenstown at the time, you may even be able to spot yourself. For those that managed to get into the store, as not everyone could due to the amount of people, we were handing young padawans a Force FX saber to pose with the troopers, making some awesome memories and photos for a new legion of Star Wars fans. The highlight of the shop photos had to be the young Luke & Leia in full costume. There was a solid queue for photos for about two hours, and when the crowds finally dispersed, we took the opportunity to get some great photos at the local Irish bar. Hey, even a Stormtrooper gets thirsty.

It was a great event, both for the troops and for Queenstown, and we hope to be able to make it an annual event. Many of our local customers have since sent emails to us thanking Reel Collectibles and the 501st for the opportunity to get a photo with a Stormtrooper, as their children are still talking about it!