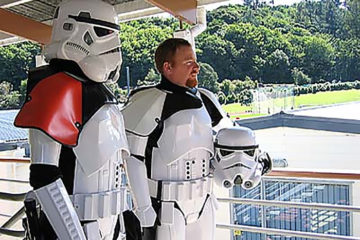 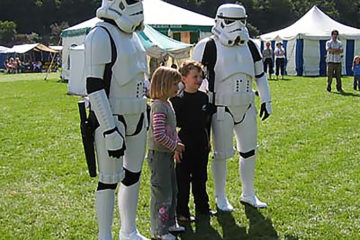 The New Zealand contingent of the 501st Legion imperial costuming club, the Outpost-42 Garrison, often make themselves available for charity and fundraising events. Last weekend (March 12-13th), stormtroopers Mike and Aaron took a break from their usual imperial duties to help raise money for cancer research in the Dunedin ‘Relay for Life‘.

Thousands took part in the 24-hour relay, with 125 sponsored teams of at least 10 members taking part – each team was required to have at least one member walking at all times.

The pair of intrepid imperials worked with the event coordinators to participate as an added attraction rather than a competing team. Their involvement was broadcast over the public address system, and by the end of their first lap, had the crowd clapping, waving, shouting and cheering. Aaron described the day as an “amazing experience”, and noted that the list of people wanting to have their photo taken with the stormtroopers included far more than the usual Star Wars fans – parents with small kids, young male university students, groups of girls, kids on their own, enthusiastic women, and older people alike wanted to stand with the troopers. 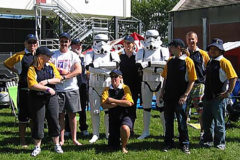 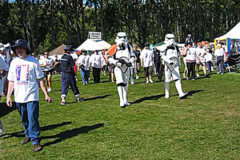 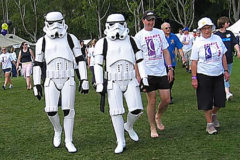 The costumed imperials continued to alternate between further laps on the track and interacting with the participants in the crowds and team tents. “I think we gave them a good performance, helped them to be connected to the Star Wars saga, and they helped us feel as though it was all worth while”.

By the end of the event, the grass of the Highlanders training ground was well trampled, but $205,000 had been raised for the Cancer Society. Rarely had so many people walked around in circles for such a good purpose.

Previous: Competition no.15 Winner
Next: Book Review – Labyrinth of Evil