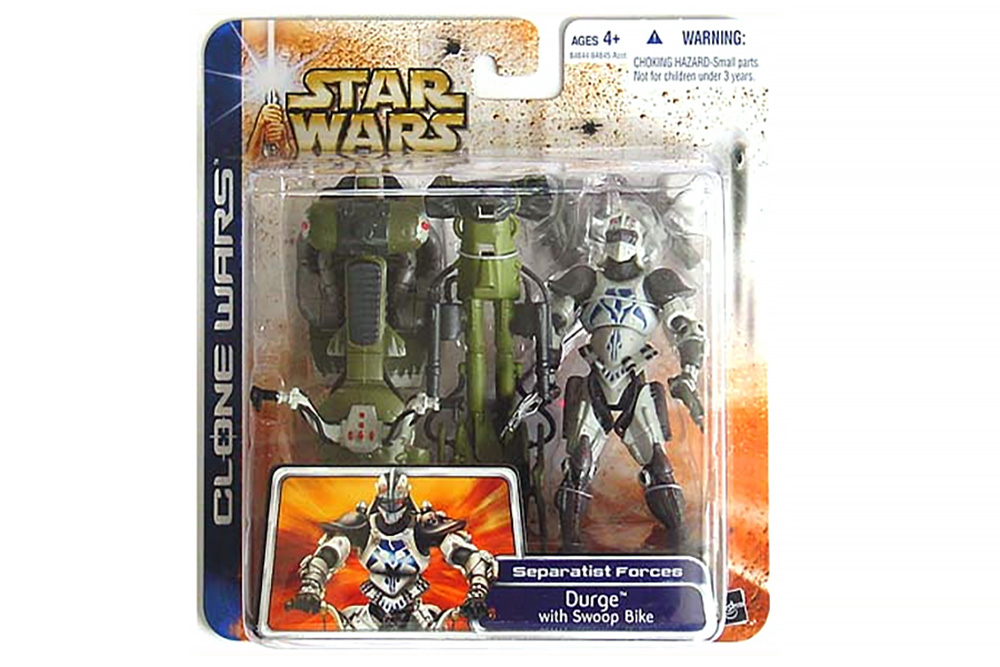 I didn’t honestly think I would find myself saying this, but…I like the new Clone Wars Durge figure. I really like it. I have mixed feelings about various elements from the Star Wars Expanded Universe, and when I first saw the marketing images of the Durge character/figure, I was dismayed at the fact that it looked more like a second-cousin to Shredder, of Ninja Turtle fame, than a Separatist Bounty Hunter. Since that time I have had the opportunity to fully digest the Clone Wars animated shorts, and, although they deviate from the storytelling style of the movies, they meet my humble approval. I am looking forward to the second season.

The deluxe figure packaging describes the character: “A century before the Clone Wars, this 2,000 year old bounty hunter went into hibernation to recuperate after being tortured by Mandalorians. Awakening shortly after the Battle of Geonosis, Durge learns that the only Mandalorians still alive are the Clone Troopers, which were created from the Mandalorian Jango Fett. Durge joins the Confederacy to enact his revenge upon Jango Fett’s clones…” 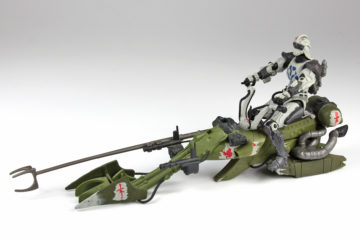 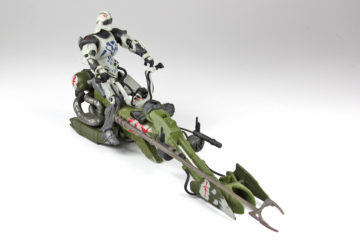 Pictured above is the deluxe Durge with Swoop Bike figure. Lined up for future releases are 2 more Durge figures: a standard version (Durge, Commander of the Separatist Forces), and a version from the animated-style range. The deluxe figure features 11 points of articulation, with 7 of those having a couple of axes of movement (shoulders, elbows, waist and knees). This means that the figure works well both as a standalone character (literally… he balances and stands up better anything I have come across from Hasbro in recent times), and astride his Swoop Bike. The latter accessory is a huge piece of machinery, measuring in at an impressive 27cm of length. The design of the bike works well. Cast in a military khaki, it is effectively accessorised with plenty of exposed cables, tubing and exhaust conduits. Two low slung aft air intakes, and a third, forward projecting, intake scoop mean that the vehicle sits nice and evenly on a flat surface without additional support. It displays well with the figure in situ.

Durge also comes equipped with a pair of blaster pistols that fit into thigh holsters, and a rifle with a strap that fits over his shoulder. The longer weapon has design elements clearly recognisable (despite its scale) as being drawn from the armament of both Clonetroopers and Stormtroopers: the folding stock of a Sterling submachine gun is immediately recognisable under the ventilated barrel derived from that same weapon. His highly-mechanised armour, bristling with weapons and gadgetry, similarly demonstrates attention to detail. At one time I thought it overkill, but in the final product, it actually ties together quite well (despite the Mutant Ninja accusations levelled at it earlier). A jetpack attaches to his back armour, and a trident-lance can either be wielded manually, or locked into an attack position on either of the Swoop’s front facing cannons.

All in all, a formidable adversary for General Kenobi. The word on the Coruscant alley-ways, should you choose to believe such a source, is that Durge isn’t down for the count yet, and returns in season two of the Clone Wars series. 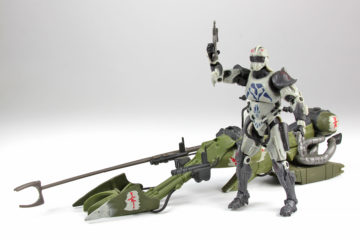 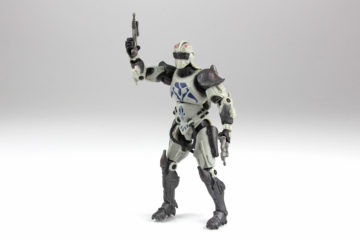 Previous: Vintage ‘Empire Strikes Back’ Cardback, 1982
Next: Farewell to a Friend