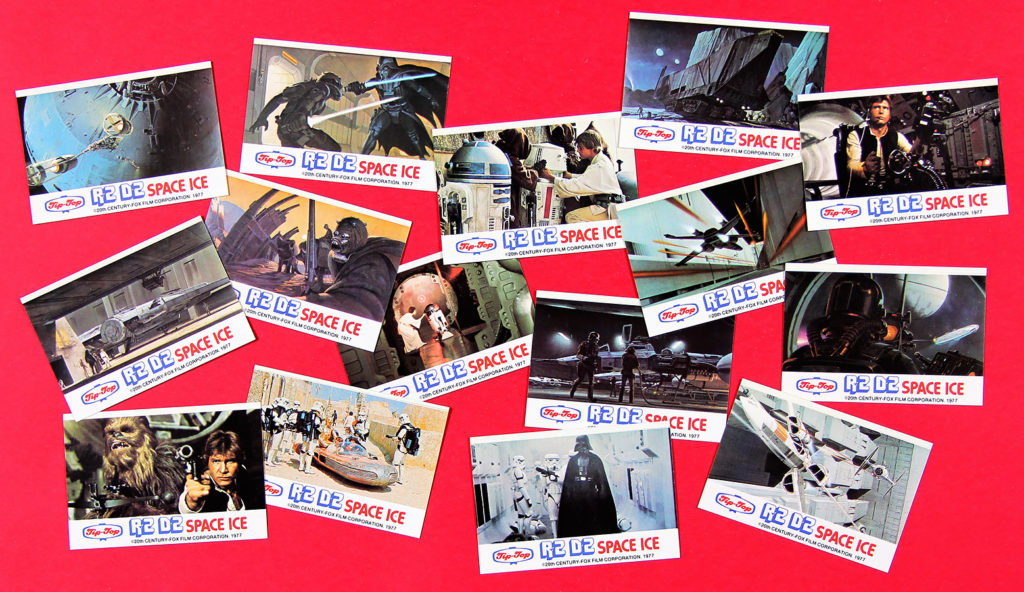 How many of you were around when these came out? These 15 small (73x50mm) stickers, released at the time of the first Star Wars movie (1977-1978) are likely the earliest New Zealand-exclusive collectibles. Composed of a selection of classic publicity shots and Ralph McQuarrie production paintings, this set could be collected one at a time with R2-D2 Space Ice ice-blocks from the Tip-Top Ice Cream company (an iconic New Zealand ice-cream/ice-block manufacturer, established locally in 1936…more company info at the Tip-Top website). The ice-blocks themselves, pictured in the advertising poster (measuring 36 x 48cm; now very rare), had an ice-cream centre and a couple of stripes of red and blue flavoured ice…and cost a mere 10c each! 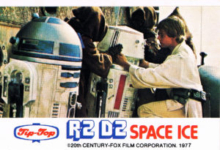 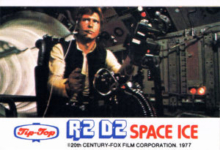 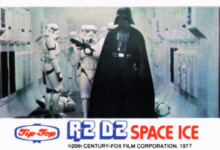 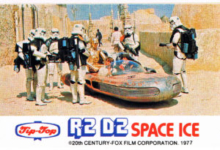 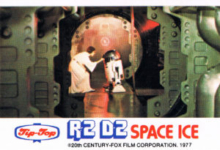 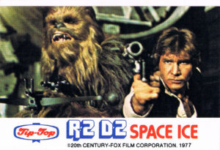 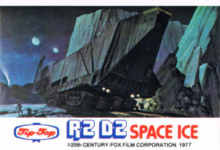 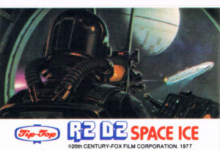 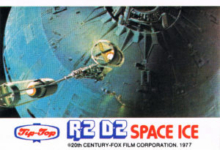 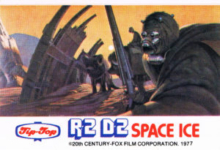 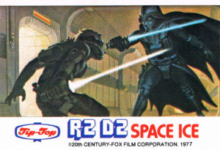 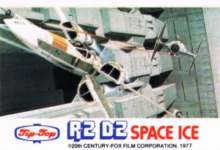 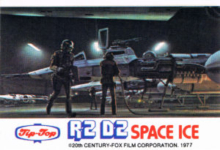 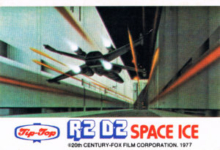 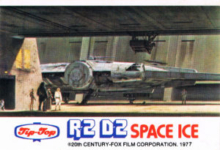 These 1977 stickers were un-numbered, but were distinctive and memorable due to their branding with the immediately recognisable Tip-Top logo (the colours of which persisted through the ‘R2-D2 Space Ice’ banner), and the more subtle 20th Century Fox copyright detailing. Also available in conjunction with the stickers and ice-block was a large, fold-out, dice-based game, “Race in Space game”. This was a fairly simple poster printed in dark blue ink, with spaces marked to apply some of the set of stickers to give the game a bit of colour (each space showed the sticker graphics in monochrome line-art). 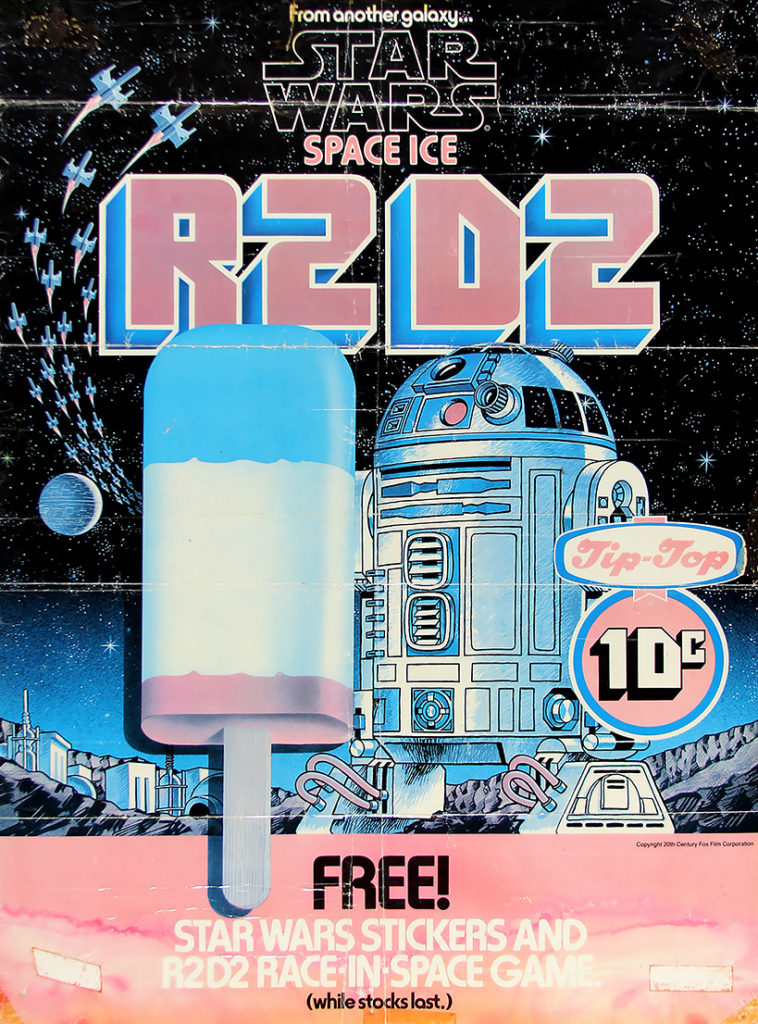 Tip-Top went on to make available licensed collectibles at the time of release of both ‘The Empire Strikes Back’ (colour-in masks) and ‘Return of the Jedi’ (another set of stickers)…not to mention the Galactic Bar ice-block (not Star Wars-associated confectionery, but certainly a loosely related product representative of the era, included here for its nostalgia value). 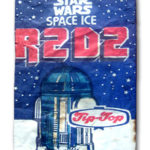 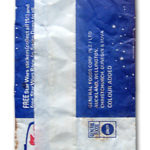 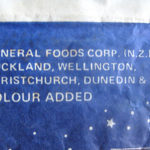 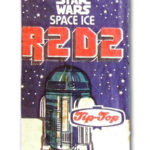 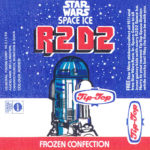 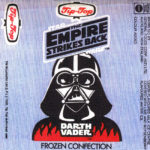 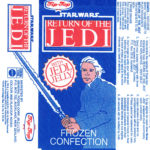 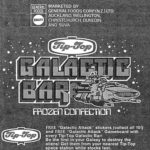 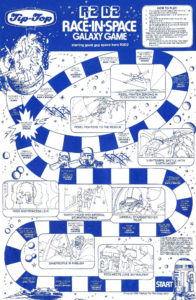 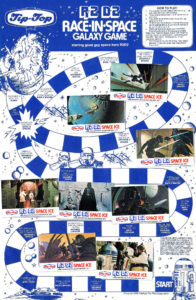 “R2D2 Race in Space Galaxy Game: starring good guy space hero R2D2”. This game-on-a-poster, which loosely interprets the Star Wars storyline and its characters, was available from the corner dairy in 1977/78 with the R2-D2 Space Ice iceblocks from Tip Top Ice-Cream.

Badly drawn stormtroopers and a grapefruit-like Death Star didn’t stop this from being an exciting bonus for the “inner galaxy kids” of the late 70s. Not many copies have weathered the decades since: they seem to be even harder to come buy these days than their companion sticker sets.

A straightforward premise: roll the dice to advance the shown number of spaces, winding your way around a simple track that leaves room for the application of part of your set of Space Ice stickers. You have to provide your own dice and counters, of course, but beyond this, any number of keen fans can huddle around.

Along the game route, random instructions impede or accelerate your journey. Some are consistent with the plot of ‘A New Hope’. Others, less so. “Cosmic brawl in cantina, miss 1 turn”…okay, fair enough. “Good guys escape Death Star, advance 2 spaces”…sure, that happened. “R2D2 breaks out the Space Ices, advance 1 space”…that must have been a scene cut from the hyperspace trip to Alderaan. “Interspace collision, back 10 spaces”…???

“Can space hero android R2D2 lead the good guy Rebels to fair Princess Leia, and escape the meteoric wrath of Darth Vader and the Empire…or will interplanetary freedom be lost forever. Only your dice will decide their fate. May the Force be with you”.

With thanks to Nick TePaa, Steve Williams, and Tip-Top Ice-Cream customer services.

Celebrate the R2-D2 Space Ice ice-block with apparel from the SWNZ Merch Store.